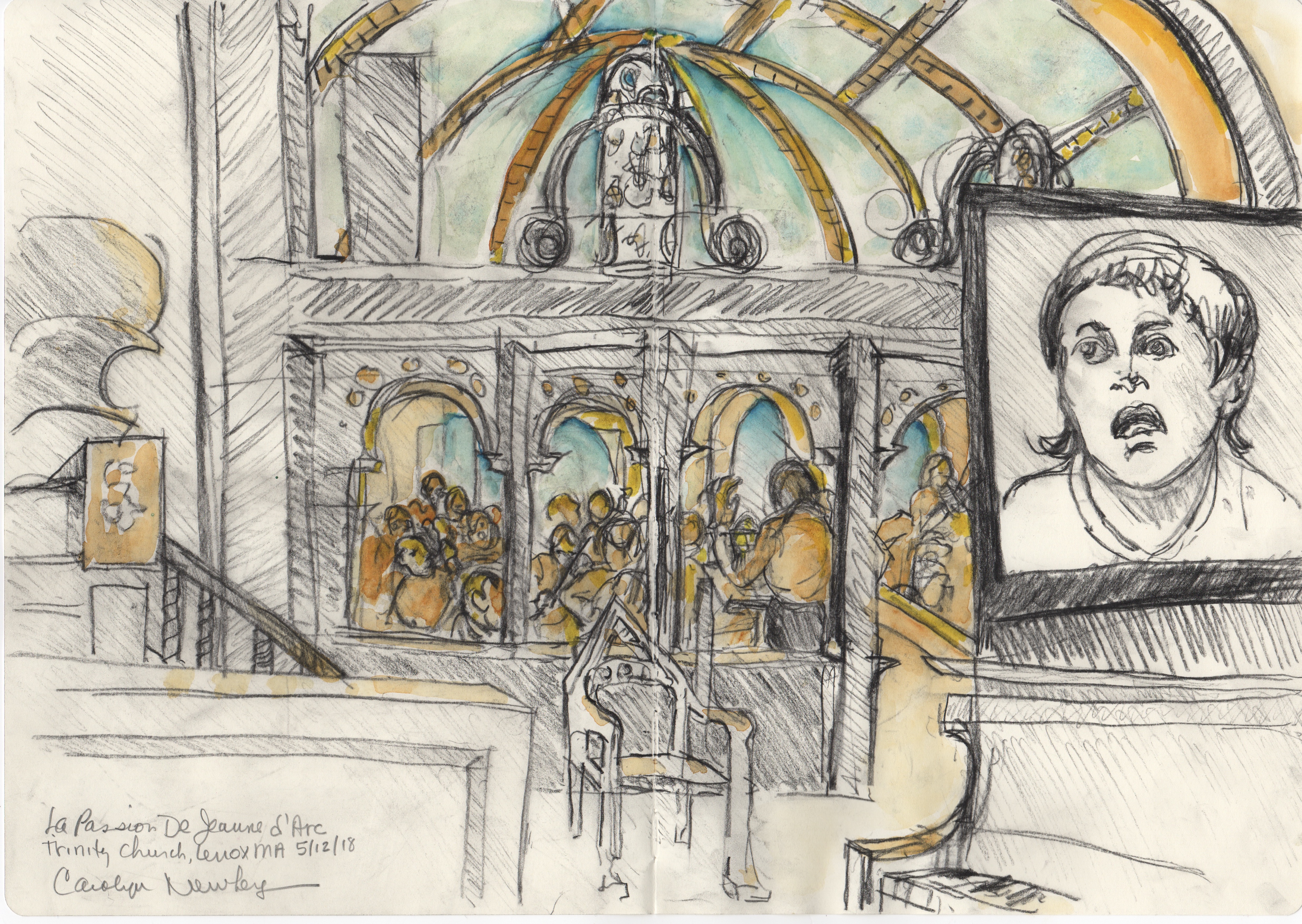 Lenox — It took five centuries between Joan of Arc’s burning at the stake in the Roman Catholic Church and her canonizing, and an additional 53 years between the making of this deeply moving, silent movie in 1928 and the emergence of its unedited print from a closet of a mental institution in Norway in 1981.

The movie, and its apposite, late Romantic, French film music, were brought urgently to life on Saturday, May 12, at Trinity Church in Lenox Massachusetts, by the Cantilena Chamber Chorale, a splendid organist, a fine and committed pick-up chamber orchestra, and a credible projection of the original movie.

Subsequent to its debut in France, the Archbishop of Paris insisted on its revision, undoubtedly because its Danish filmmaker characterized the clerics who presided over Jeanne’s trial and condemnation as leering, sneering, and sinister.

They appeared all that and more, in over-the-top drooling, spitting on Jeanne when she claimed that she knew she would go to heaven, and asking her questions designed to provoke humiliation, after she, chained, places her hand on a bible, also chained, and swears to tell the truth.

To “What do you expect from God?” she replies, “The salvation of my soul.” As she is told that this is blasphemous, the assembled prelates screw up their faces and mutter, “Shame.”

Another question, “Why do you wear men’s clothes?” is posed to Jeanne repeatedly.  At the outset of her interrogation, she replies that only when she has completed her God-given mission to drive the English from France would she wear women’s clothes.  Toward the end, as she asks to listen to a mass for the last time, the inquisitors ask if she would trade the ceremony for changing into women’s garments. When she says no, she is again accused of blasphemy, punishable by death.

To the extent that all this provoked in your reviewers feelings of anguish and rage, the actions of the over-armed, metal-hatted British soldiers were still more objectionable.

Mercilessly mocking Jeanne as she awaits her torture, they place with absurd ceremony a straw crown on her head, pull harshly a precious ring from her finger, violently twisting her hand. Then, holding the ring over her head, they force her to pose with one of their arrows as a scepter, before stabbing at her arms with others.

After the execution, balls and chains, pikes, and spears are lowered from the parapets of the military castle to the waiting soldiers below. The soldiers then redouble their brutality against the rising populace, most of whom appear to be peasants. This violence is depicted with stunning cinematography.

Jerking, stopping, restarting, even throwing the camera into the air, continually disrupted the viewpoints. One was nauseated and further enraged by this riot of injustice.

Showings of the unedited movie in England were also banned, for obvious reasons, it would appear.

Throughout the film, searing images depict the impacts of clerical and military violence. As the auto da fe is prepared, shouts and laughter emerge from the crowd as they are entertained by acrobats, dancers,and contortionists.

A baby in narrow close-up suddenly looks up from its mother’s breast, and in two seconds, dismayed by the noise, returns to her nipple. During the uprising, a schoolboy weeps uncontrollably by the face and torso of his dead mother.

Her virtuosic performance included the stunning ability to shed a single tear, the quiet anguish of confronting death by burning, and subtle facial expressions of astonishment, deep religiosity, sublime spirituality, and occasional verbal pronouncements, represented in subtitles, in which she affirmed  that she was God’s daughter and a true Christian, notwithstanding the accusations of the clerical inquisitors that she was a child of the devil, even pointing out that it was they who were the Devil’s accomplices in making her suffer.

The music in this performance underscored the powerful emotional resonances of the film, although its style was inconsistent and often confusing.

Andrea Goodman conducted a superb force of chorus and musicians with energy, drama, and passion.

A pastiche of late French Romanticism, one heard in quiet passages shades of Maurice Ravel; in the forte exertions by the full forces, Hector Berlioz and Cesar Franck; in the duets between organ and orchestra, Camille Saint-Saens; and most affectingly in solo organ displays, Louis Vierne’s organ symphonies and fantasy pieces.

Soaring evocations of anguish and repeated downward intervals signifying imminent disaster by the cellists, Perri Morris and Petia Kasarova, gorgeously expressed legato phrases by the oboist, Joanne Nelson, and panoply of melodic and rhythmic solo phrases reminiscent of Paul Dukas were beautifully played by bassoonist, Stephen Walt. Remarkably, despite the distances among the choristers, instrumentalists, and organist, the intonation approached perfection. Clashing, percussive dissonances crunched against one another in the final violent scenarios.

Special mention must go to the organist, Peter Krasinski.

His astute use of the swell boxes of the Church’s fine instrument made possible balancing to perfection the  quiet voices of the sopranos and altos, and expanding precisely the more forceful articulations of the clergy’s cruel assertions by the entire chorus.

Toward the end, as the smoke and fire rose, as a villager exclaimed, “You have killed a saint!,” Krasinski sounded a subtle call of martial trumpets, even as he accompanied the orchestra in a mezzo forte passage, signaling the military carnage soon to arrive.  Here was brilliant technique on the king of instruments!

Mr. Kasinski specializes in the art of live silent film accompaniment, according to the program notes. His website provides musical examples of his Bach and early music, as well as his own transcription of Leonard Bernstein’s Candide Overture, which he performs on the marvelous organ in the Methuen Memorial Music Hall.

Hats off to the organizers of this evening’s pageant, an unforgettable musical experience, which left a full congregation on its feet in a prolonged ovation for all the players, lined up in the side aisles.

Below is a compelling excerpt from the digitally restored movie, in which Jeanne’s interrogation precedes the clerical vote and sentence. The English soldiers arrive in battle uniform.

Tellingly, Winston Churchill is quoted in the YouTube notes. He wrote in A History of the English Speaking Peoples:

“Joan of Arc perished on May 29, 1431, and thereafter the tides of war flowed remorselessly against the English.”