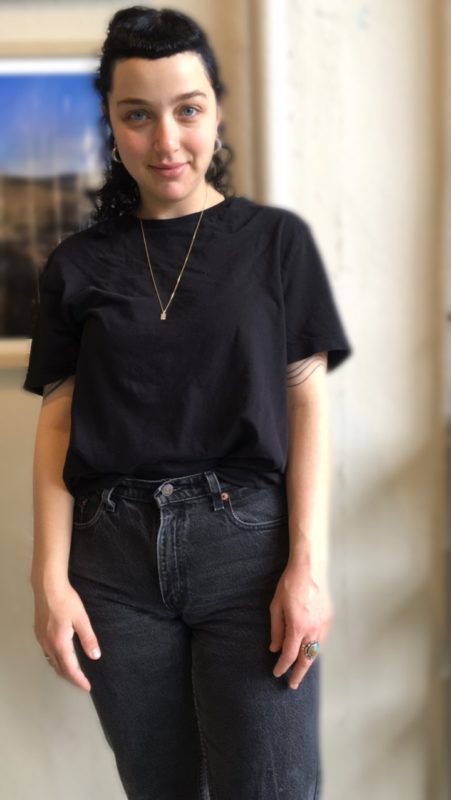 Alice Barrett
Sara Wallach, co-curator of ‘The Radness in the Sadness,’ in front of her four archival pigment prints.

Housatonic — “I’ve always been interested in people’s pain,” said artist Sara S. Wallach, acknowledging a simple, albeit stark reality: The living of life often means there are sad, mundane things happening around us. While contemplating, Wallach got an idea: What if she created a pop-up gallery, positioning different artists working in varied media in conversation with one another? The fleeting event, which opened Friday night to a packed house that included all the artists and a throng of roughly 75 well-wishers, speaks for itself. “The Radness in the Sadness” is a pop-up art exhibition curated by Wallach and Galen Kardashian. The collection of works celebrates the aspects of life that are sad and difficult but give us, as individuals, character and purpose.

“[We are all] expressing this sense of being lonely, forgotten,” Wallach said in a nod to the common thread binding the seemingly disparate group of artists together. Of the eight artists feature—including Wallach, who is a photographer—nearly half had never shown their artwork publicly. “I sensed that these people needed some sort of boost in their existence,” said Wallach of the featured artists who, save for a handful of locals, were only known to her through Instagram. Her idea for a pop-up meant giving others a chance “to express what they express on Instagram, but in real life.” Interestingly enough, this move ironically thrusts the artists and their work into the proverbial spotlight.

“A lot of people are in denial about a lot of aspects of their existence,” explained Wallach. “This show highlights those things people often don’t want to acknowledge.” From this stepping-off point—and in conversation with my 12-year-old, who came along to take pictures—an important conversation ensued as to the uncomfortable things that both define the human experience and are simultaneously avoided as, to quote Wallach, “they are not always fun, so it’s easier to pretend they are not there.” Case in point? “Hikikomori Exhibitionism,” an installation by Neil Arron, a graffiti artist hailing from Troy, New York. 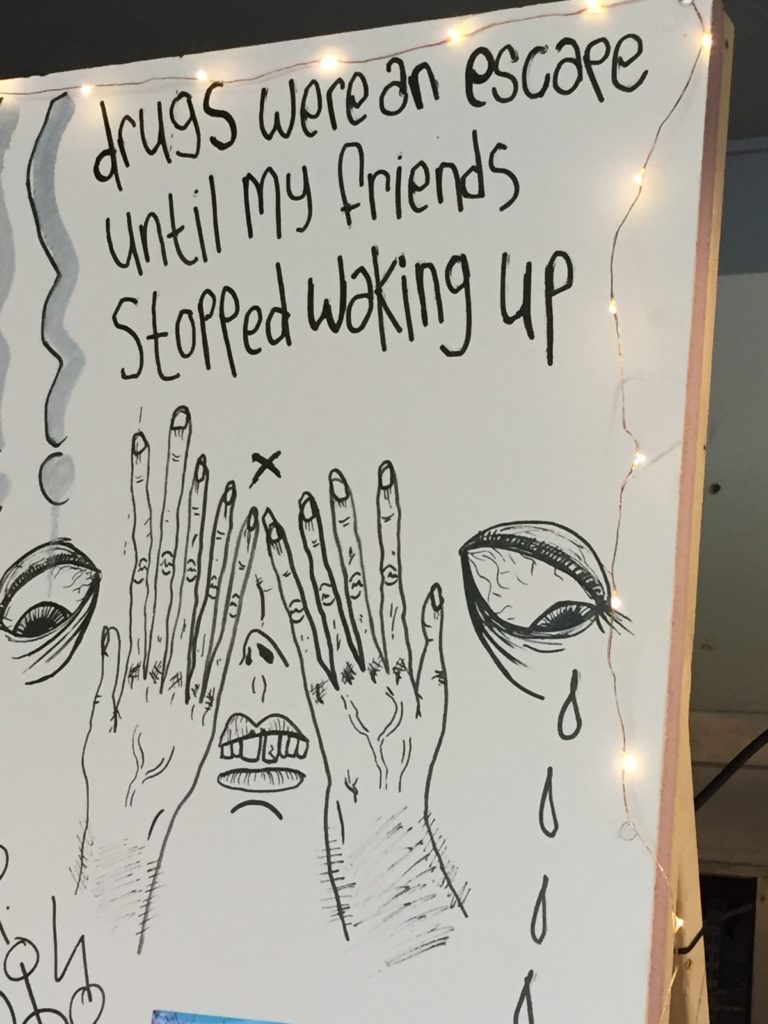 Details from Neil Arron’s ‘Hikikomori Exhibitionism’ installation at ‘The Radness in the Sadness.’ Photo: Alice Barrett

In his artist statement, Arron makes a profound connection between the literal and the figurative, in particular that “the husk is the brush, the canvases are the walls we erect, the lives we lead.” His installation, ostensibly a single bedroom belonging to anyone, was rife with allusions to all that plagues modern humans: The space was littered with Juul pods, burnt cigarette butts, cans of spray paint, a sad face made out of roses, handwritten notes, empty pizza boxes, an American flag and a bong. “It was kind of a mess,” my daughter remarked in retrospect. “It seemed like the person [living there] might not have been very happy with themselves, or depressed,” she added, noting, “there was a lot of beer.” There was also a single book, on the red plastic milk-crate-turned-end-table titled “14,000 Things to Be Happy About,” which, while symbolizing a kernel of hope in a world of despair, was eventually overshadowed by the literal writing on the walls: “Drugs were an escape until my friends stopped waking up,” “I assure you, HELL is not a myth” and “Wait until they see what’s inside my trench coat.” Arron, whose first installation this is, had no knowledge of what he would offer when Wallach invited him to participate. From my perspective, his work leaves an indelible impression if for nothing other than its raw depiction of one person’s life. Somewhere. 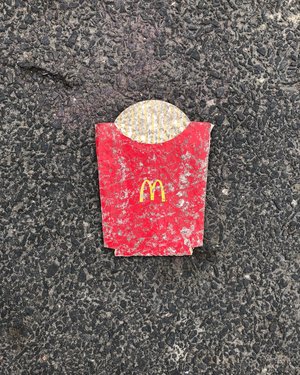 “The idea is that personal struggles inspire artistic expression,” explained Wallach. “These artists each take on the sad, forgotten, mundane aspects of existence and turn then into various artistic practices: works on paper, text, installation, video and photography. In doing so, they locate sources of pain and repression and, in their exposition, create something new, tangible and meaningful.” Wallach herself is a fine art photographer whose work explores the hidden identities of forgotten objects. The way she sees it, “Mess, litter, and trash objects can be put back together in a new form: a photograph.” I was particularly struck by her image of a McDonald’s french fry box, flattened by traffic and infusing the otherwise drab yet textured asphalt with a splash of red. “I view myself as a detective,” said Wallach, “finding existing visual moments and coaxing a new truth from them.”

As to the venue? “There is a different kind of energy in a pop-up than a [stand-alone] gallery,” said Wallach. “I really like the model.” And for a group primarily made up of individuals who “met” on Instagram, there is another layer: embracing insecurity. “We should be allowed to express insecurity not as a weakness, but as a condition of human existence,” said Wallach, which, consequently, fits perfectly with the transient nature of the exhibit. “When we are young, [others] give us a lot of credit for our innate talents,” said Wallach, noting the inevitable fall off that follows: As adults, in the absence of such credit, many lose sight of their inherent capability no matter the arena. “This show is about trying to reclaim some of [the credit],” said Wallach. 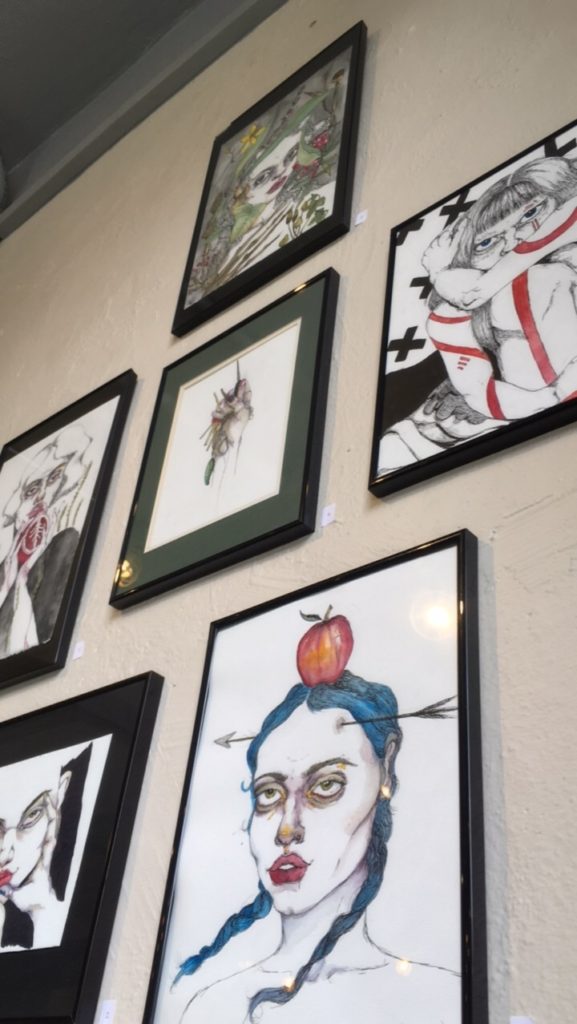 A series of work in pen, watercolor and ink by Tagan Hawk at ‘The Radness in the Sadness.’ Photo: Alice Barrett

Wallach, who grew up in Great Barrington and now lives in the burgeoning, creative hamlet of Housy, worked with Patrick Hollenbeck to make her vision a reality. In a written statement, Hollenbeck, the owner of the space, said, “It is my hope this pop-up concept turns into a pilot program to be replicated by other property owners of vacant storefronts in downtown Great Barrington so that the talents of our local creatives can be enjoyed by all.” Hollenbeck acquired the former Housie Market space, at 226 Pleasant St., at auction last year.

The pop-up, which coincides with a statewide celebration of ArtWeek in the Commonwealth, will be on display through Tuesday, May 7; the community is looking forward to this opportunity to bring creativity and vitality back to this corner of Housatonic. Featured artists include Neil Arron, Jacob Bronstein, Visual Vomit, Galen Kardashian, Tagan Hawk, Christina Pedretti, Valentina Sarfeh, and Sara Sofia Wallach.

— Gae Elfenbein
Read next: No temporary fix: Cottage Street bridge to be closed for five years