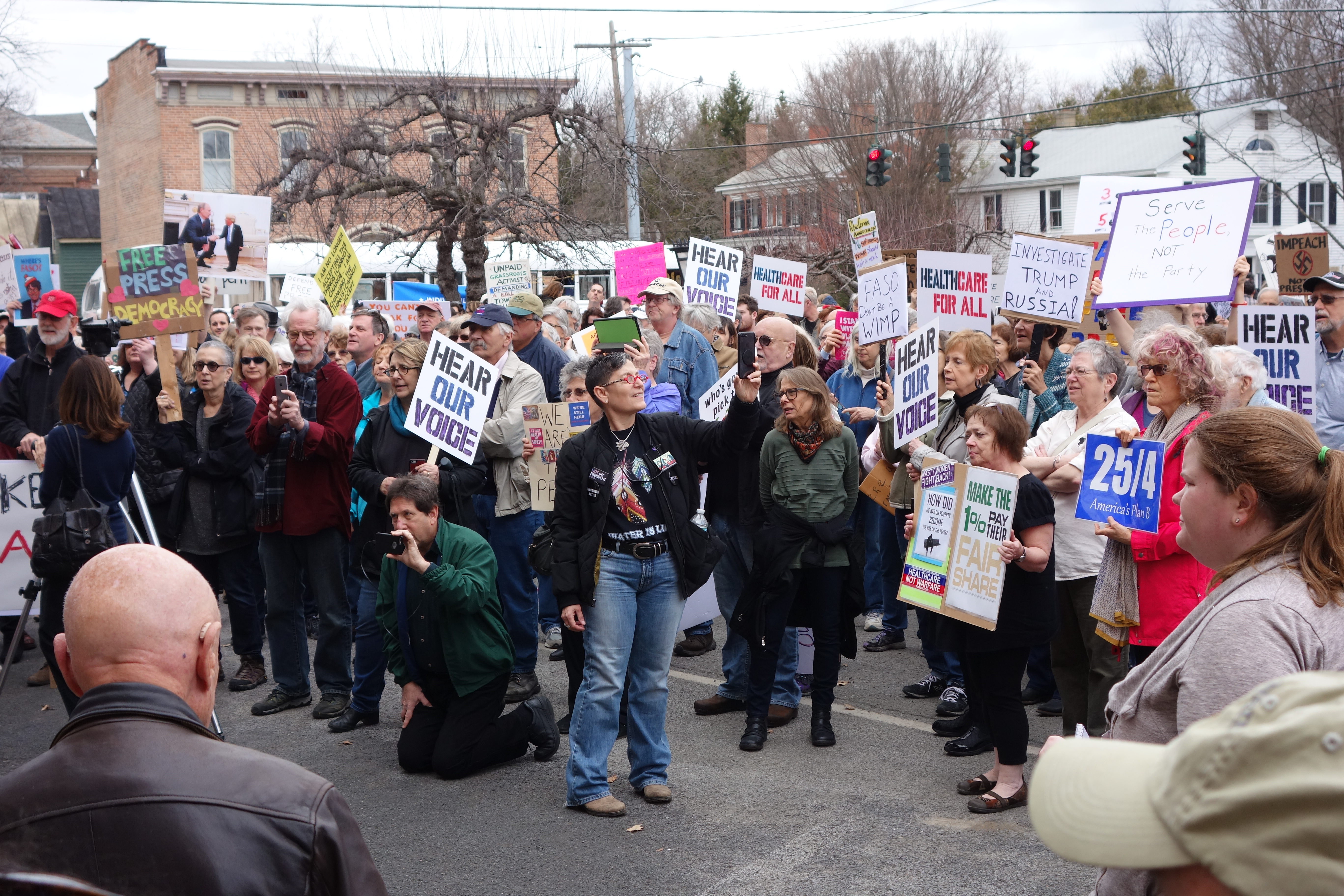 Chatham, N.Y. — In a campaign ad last April, John Faso, the Republican candidate for New York’s 19th Congressional District, ended the video with a toothy grin, saying, “You can’t fix a problem by ignoring it.” Today, Faso represents New York’s 19th district in Congress. As a result of his new job, if Faso looks out the window of his house in Kinderhook today, he will likely see a crowd of loud, angry, and energized demonstrators holding picket signs and chanting about healthcare. He, and his fellow New York residents must be wondering the same thing: are these protests the early stages of a new grassroots political revolution in the age of a President Trump?

Political movements often start out promising, but over time, fizzle out as people carry on with their daily lives. But Alan Gelb, the founder of Indivisible Chatham, N.Y., a chapter of the national Indivisible organization which works at a grassroots level to oppose Trump’s agenda, seems acutely aware of the rocky terrain ahead. Gelb explained that Indivisible was loosely based often the tactics of the Tea Party which, he laments, was largely successfully in opposing the Obama agenda. With an email list of roughly 500 people, Alan and his team on the Indivisible Chatham Steering Committee organize events each week for local residents to protest in the front of John Faso’s house, canvass doors, hold forums on healthcare and immigration, and even, a weekly book club. These events are all part of the organization’s goal stated on their website: “We are working with our fellow Indivisible chapters and other resistance groups throughout the district, opposing the agenda of the Trump White House and pressuring our members of Congress to uphold the democratic ideals upon which our nation was founded.”

Attendance at these events ranges from 40 to 450 people. On Friday, June 2, Indivisible Chatham will be hosting a mock town hall on women’s rights in front of Faso’s house in Kinderhook. The event comes as a demonstration against Faso’s refusal to hold town halls and his “pro- life” views. Such gatherings are designed to put political pressure on Republicans like Faso to influence their policy decisions, but they require energized volunteers who can afford to take time out of their schedules for activism. Gelb, whose day job involves being an author and running a college essay counseling service, noted that, “A big part of this is trying to integrate all these events into your life. We have all been bombarded with input. We are trying to figure out how to organize our life so we have time for all of this.”

What makes Indivisible Chatham “unique,” in Gelb’s mind, is that “we have created a real community.” He recalled, “someone once told me that going to our events makes them feel better about everything.”

Feelings aside, the organization has ambitions goals. Gelb noted that five people had come forward and voiced their interest in running against Faso in 2018, (candidates include, Gareth Rhodes, Susan Sullivan, Jeffrey Beals, Antonio Delgado, Steven Mitchell Brisee and Brian Flynn).

Gelb hopes they will have narrowed the search down to a few candidates by this November. Faso is all but guaranteed to draw huge campaign donations from Republican lobbyists and the Mercer family when he runs again. While many members of Indivisible Chatham may prefer that their candidate raise money the way Bernie Sanders did, through $17 donations, Faso’s opponent may not have that sort of liberty.

Fortunately, Indivisible Chatham and the larger “resistance” movement in District 19 will have help from their neighbors in Berkshire County. Michael Wise, an attorney and chair of the Great Barrington Town Democratic Committee, is eager to help out, but says, “Many of us are saying, let’s wait and see because it’s the people in the 19th district that need to win it back. We don’t want to be directing that. I have spoken with people in the Berkshires who are very enthusiastic about some of the candidates over there, but that’s their choice to make, not ours.” Wise noted that the biggest thing Massachusetts residents could bring to the Indivisible movement were more bodies on the ground manning tables and knocking on doors.

“The Democratic establishment is aware of the need to govern. I was at the march in Washington, it was a great event and we have had others since,” he said, adding, “But there is a limit to what you can do with marching.” Wise cautioned that while immediate change sounds romantic, real change can take a lifetime, saying “The model is the Civil rights movement. It had protests and marches too, but it was also a very complicated, decades-long strategy.”

Back in Chatham, Gelb nodded to a sentiment shared by Wise. Before leaving he looked up and said, “It’s easier to resist when all the cards are against you, it’s very motivating.” With a wry smile he added, “Now we just have to win some elections.”

We will be following the “resistance” movement in CD-19 with more updates to follow.