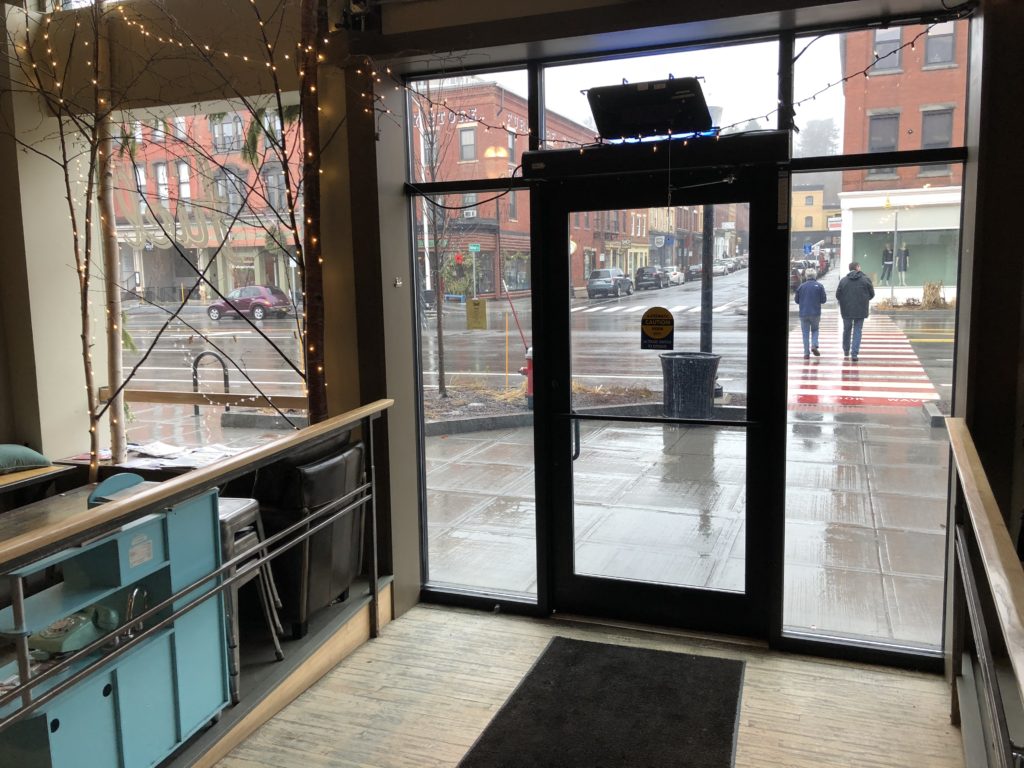 Boyd Norcross had just been informed his day, this Friday before a week off, was officially and irredeemably, a bad day. Sitting in his cubicle at the Department of Analytic Production and Dissemination at Langley, CIA headquarters. From time to time he called up his boarding pass for the American Airlines flight to Barbados that evening on his iPhone, thinking body surfing and rum drinks, sunsets and sex, his boss, Cora Capetti, late of South Philly and the University of Pennsylvania, had just come by and dropped a folder on his desk and said, “Hey, Bad Boy, your weekend just got carpet bombed. WH SIT room needs options Monday morning 0800. My desk by midnight, together we’ll bring it to the Deputy Executive Director.”

He had barely gotten, “Don’t call me . . .” out when the the rest of what she said rolled over him. If the CIA rep at the White House Situation Room didn’t have the goods to lay out by meeting time, career prospects will start dwindling. That very tough marine ex-four-star was going to get on his most secure phone and start chewing out the Director, like a recruit who had just dropped his rifle, who in turn . . . . No need to connect the dots for this analyst.

“Nothing? I better get started then.”

“You better get started, and, kid, it was nice knowin’ ya.”

“Well,” he said to himself, as Cora strode off, “let’s see what the fate of the Western World depends on today.”

The information in the folder was definitely in Uncle Carlo (don’t-ask)-speak: Ugatz. It was Boyd’s job to provide information with context and causality to events that might affect operations and tactics. In other words, what was going on and why, and what should the U.S., or rather the CIA, (lots of blurred lines there) do about it?

Think: reconnaissance photos of missile sites in Cuba, leading to blockade, leading to eyeball-to-eyeball stare down between Kennedy and Khrushchev. Mostly he dealt with analysis of informants’ descriptions of shifting alliances within Hamas, Hezbollah, Al-Fatah, the Muslim Brotherhood and lately ISIS, but their day, horrible as it was, seemed to be over. His was a very delicate job because the CIA in the Mideast had essentially one major source of information — the Israeli intelligence, Mossad — and whatever factory sweepings it could glean from elsewhere. Or, as he often put it to himself, how can you figure out the truth when everyone is lying, and sometimes they don’t even know they’re lying? Egypt used to be good, sort of, not so much any more. Okay, let’s focus.

What he had in front of him had been prepared by Peter Tock.

In intelligence work, the most important question is the “Who?” But it’s not “who” you think. It’s “who is this intelligence analysis you are going to write so brilliantly for?” With the missiles in Cuba, the “who?” was not Castro, not even Khrushchev, it was President Kennedy. What did he need to know. Since his report, after caroming off a few corridors in Langley, was going all the way to 1600 Pennsylvania, this was going to be tricky. Well, if all else failed, he could point the finger of blame at those ungrateful Palestinians.

The secondary “who?” was this guy Zain Toma. His latest legend had him as an Iraqi refugee, former economics professor. (Hmm, at least he hadn’t been working on nukes or poison gas.) Story was he had been an interpreter for a Company special ops unit. He tried finding him on his desk computer. The inquiry was immediately flagged “Fuhgeddabout it,” that is, Access Denied.

Peter Tock rumbled the phony eco prof legend with one phone call to the U. of Basrah. Tock had spoken to Boyd’s intake class. He was very, very sharp.

Toma had snagged a job on the faculty at Pine Rock College in the Berkshires. One day he met a “short, somewhat rotund Caucasian man” in a café in Pine Rock, got into a black Infinity Q70 with him and vanished from the face of the earth. As these guys do. A blonde in a uniform was driving.

The provost at the College, one Cynthia Curry, calls up the guy at State who had basically placed Toma there. “State?” Boyd sighed, “Oh no, they’re playing spook games, screw me now.” There was a very poor record of inter-agency cooperation.

The juicy part: Tock had a contact on the Red Team he called Sergey, who opened the kimono and told him Toma, originally Fyodor Nevski, was one of theirs, trained to be a mole in the U.S. and capable of learning any language you wanted, quick as a wink, including bing-bing-bing, Yiddish.

Toma was in the wind, and the Red Team, according to Sergey, claimed not to know where he was, who the guy in the café or the blonde in the uniform were, or which side Toma might be considered to be “on.”

Tock was operations. He just had to do stuff and report in. Boyd had to make sense of all this, so his bosses could act as if they knew what was going on, which they didn’t.

Why does everyone, namely us and them, want to know where he is? To bring him in or “neutralize” him.

Why? Because he knows something? What would that be?

Technology secrets? Like how to make the battery in this damn iPhone last longer than a day?

Scientific secrets? What is Dark Matter, and who cares?

Military secrets? Like what are we going to do with that chubby guy in North Korea?

Criminal secrets? What is the relationship between the Ministry of State Security (China) and the overseas Triads?

Political secrets? Whose side is POTUS on? Skins or shirts?

Economic secrets? Where is there a big pile of cash lying around that people want to get their hands on?

In the early days of the Iraqi war, the U.S. shipped billions of dollars, pallet after pallet, over there for “expenses.” Overall, the war cost the U.S. $801 billion. Ah, the exactitude of that 801 figure. A U.S. $20 billion piece was missing for a while but later claimed to be accounted for. Sure. They would say that, wouldn’t they. Boyd was willing to bet that a piece of that money was still up for grabs, and Zain Toma was a player. In fact, he was going to bet his career on it.

That was a good hour’s work. Now, who were the pair that lifted Toma in the Infiniti? Cars have license plates. If they go any distance, they pass through toll booths, equipped with all those lovely cameras that record their data. Where does data go? To its natural habitat: the National Security Agency. Does Boyd have a link to the NSA? Of course he does. Intelligence is a people business.

He gussied up his request in an official query routed through the NSA/CIA portal, directed to the aforementioned contact, asking for the license plate numbers, photos of occupants, if available, of all Infiniti Q70s which passed through any toll booths on the western end of the Massachusetts Turnpike, on the day of and one day prior and one day after Zain’s farewell appearance. And, since the NSA had everything, and he was being not only polite but for a CIA guy practically obsequious, he asked for information on the registered owner. He sent it off and waited. Priority Level High was the best he was authorized to go, but, he lived in hope.

In 42 minutes he got a secure email with a reply.

There were eight Infiniti Q70s caught on the cameras on those days. One was black. There were no photos of the occupants. The car was registered to one Emilio Ignacio Suarez y Munoz, resident of Panama City, Panama and partner in the firm of Guzman Taliaferro.

Guzman Taliaferro, it turned out, was prominently mentioned in the international shell game described in the leaked Panama Papers. Money went in, swilled around for a while, then disappeared, till needed again.

Senor Suarez y Munoz, you are a person of interest, indeed.

File photos (Google, actually) showed a man escorting his wife? Girlfriend? to a gala somewhere or other. He wasn’t wearing a track suit that night but he had already achieved that degree of orotundity celebrated in the Toma file.

In the hours that followed Boyd tracked the comings and goings across American borders of el gordo, as he has begun to call him. He delved into his past, making use of high school Spanish that had largely been replaced professionally by his college Arabic.

And what was the language they were heard using back in that cafe in Massachusetts? Panamanian street Spanish, which YouTube revealed sounded like the speaker was talking with a mouthful of mashed potatoes? Arabic? Yiddish? Hebrew? Ladino? He wondered if the NSA was into sharing its recordings of telephone calls made by Toma or the Panamanian. Wouldn’t hurt to ask. Which he did. And they didn’t. Okay, maybe later.

The el gordo family had been successful over the generations, acquiring significant amounts of land which they held onto tenaciously through the recent regimes of Omar Torrijos and the genuinely creepy Manuel Noriega. Some of their land was almost pristine rainforest, whether through neglect or laziness. No mention of airstrips in the jungle refueling planes on the Bogata to Florida cocaine run. Recently, the family had struck another vein of wealth when they transformed what had been a hunting lodge on a hundred or so remote hectares into an ecolodge. Where they had welcomed the dictator of the season to shoot whatever was flying around, they now welcomed birders and biologists from around the world.

When Boyd opened up photos of the lodge and its guests, (what did spies do before Google?) he found a shot of one of their guides, the very attractive Esmeralda Reyes, looking dashing in her resort uniform, her blonde hair gleaming in the sunlight.

Now, Boyd placed one more bet with himself. In one minute he had his answer. Damn, he was good.

A Gulfstream g650, registered in the corporate name of Guzman Taliaferro, had lifted off from Pittsfield, Mass., airport the night of Toma’s disappearance. The pilot had filed a flight plan that would take it to Tocumen Airport in Panama City.

After this, maybe two weeks off.

He stretched and began typing his brilliant analysis: a clear thesis and supporting evidence. Brief and to the point.

— Emma Goldman
Read next: NATURE'S TURN: The Year of the Bird