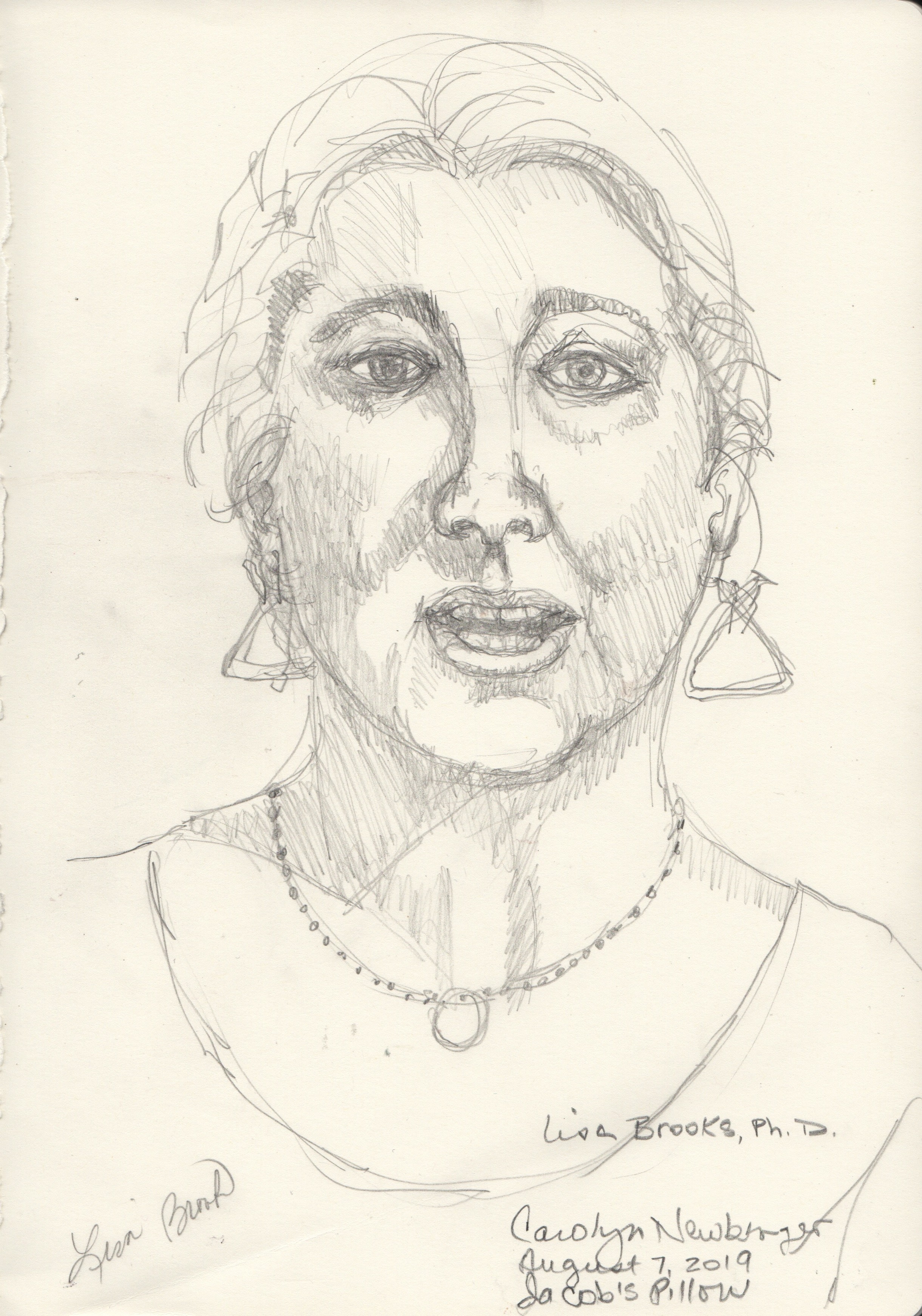 On Aug. 7 at Jacob’s Pillow, the three events for “The Land on Which We Dance” delivered profound insights into the chasm of understanding of one’s heritage and history between those of us who grew up enjoying our lives in places like suburban Pittsburgh and New York, and the native peoples who see themselves as inextricably linked to the land and the skies above it.

Jacob’s Pillow, which has honored Native American traditions and dance since its founding in 1933, is bridging this chasm with a week commemorating “The Land on Which We Dance” and the peoples who trace their ancestries through this land back into time. Pillow director Pamela Tatge announced her commitment to build indigenous dance into the Pillow’s programming every year in the hope that Jacob’s Pillow will serve as a platform for enlightenment and inclusion as well as for the highest expression and development of dance as an art form.

To begin the consecration, Amherst professor of history Lisa Brooks, a descendant of the Abenaki Nation of Eastern North America, summarized contemporary research on re-mapping native space in the Berkshires and beyond. She described a literate people with a deep sense of fairness, democracy and hospitality, and written languages with which they wrote treaties to join their separate nations in peace.

“History” to Native Americans, she emphasized, is embodied in a sense of place, rather than the European measures of time and land, and many contemporary Native Americans are returning to their ancestral homes. In the present day, descendants of the Mohican founders of Stockbridge host a walking tour of their town. They — and now, we — are acutely aware that treaties signed in both languages by Mohican and English leaders, which designated that Native American Stockbridge would include few English residents, were systematically violated. English occupation and native subjugation ultimately created a reversal of traditions of farming, hunting and fishing in shared common areas (essential Native American values), and forcibly subordinated the leadership roles of women in agriculture to European notions of household subservience.

Following professor Brooks’ Pillow Talk, the participants walked through the drizzle to the Perles Family Studio for a Powwow originally scheduled for the Inside/Out stage. The audience filled the bleachers and sat on the edges of the floor, filling the space.

After indoor performances brilliantly curated and directed by Sandra Laronde, the artistic director of Red Sky Performance, a vigorous community consecration began inside and moved into the outside grounds.

Tribal leaders and dancers from the local Wampanoag Nation, followed by members of the audience, circled the sacred landscape before returning inside to form a fabulous final commemorative circle.

Truly, this vast space was filled with love as well. Performers from New Zealand to Hawaii, from British Columbia to South Dakota to the Berkshires, thrilled us with a generous display of their indigenous song and dance traditions.

Highlights of the Perles’ Inside/Out performance included duets sung by Martha Redbone and Soni Moreno; from New England, a Wampanoag blanket dance performed by women to celebrate their acceptance of marriage; and a performance of song by Larry Spotted Crow Mann of Springfield.

These performances were accompanied by traditional drums played by both men and women, with penetrating, emotional vocals in several languages sounding effectively through the room (bravo to the Pillow A/V staff!), this was a 3-dimensional immersion into the passions and yearnings of traditional cultures.

Brief explanatory introductions were given by the dancers, who also described their own formations as leaders in the movement to restore pride and nationhood to their peoples.

The scene was imbued with a sense of fulfillment and joy as the adults and youngsters in the dance formations, seated in a row in the back of the room, erupted with claps, hoots and singalongs to the music, and the unremitting adoration of the Pillow audience. (This was a free performance. Thank you, Jacob’s Pillow!)

To begin the ticketed performance in the Doris Duke Theatre, a short, silent home movie was shown from one of the Pillow’s first years. Native American dancer Tom Two Arrows’ heartfelt, subtle and graceful performance was given live accompaniment by musicians Orla Barlow-Tukaki, Bryant Didier and Rick Sacks. Their rhythmic timing and comprehension were totally convincing, suggesting hours of study and rehearsal.

Red Sky re-imagines in “Trace” an ancient Anishinaabe story that reads in the stars and sky a human history tracing back into the beginnings of the universe, through creatures of the oceans and the land, through a harmonious human time disrupted by colonization, civilization and industrialization, and then forward into the stars where restoration and wholeness are again possible.

In contrast with the elaborate traditional dress of the powwow dancers, the seven members of the Red Sky Company from Toronto, Canada, were dressed in the simplest of costumes; snug white shorts and white midriff tops for the four women, and unbuttoned white shirts for the men.

The company entered the stage beneath an eclipsed sun projected on the rear wall, haloed in white surrounded by brilliant azure.

This is our star, emerging from eclipse to light, the beginning of time. The dancers entered as a single body, entwined, lifting one above their heads, and then others in undulating, extended movements, only to be reabsorbed into the heaving mass while primordial sea and plant images flowed across the rear screen, suggesting the unfolding progression of evolutionary life.

This evening-long narrative was danced with extraordinary power and athleticism beneath projected images that contextualized Native American experience. The narrative flowed visually and kinetically from evolutionary history through supple human harmony, into the disruption of the Colonial world where the dancers’ ever-flowing movements lost their grace, become disjointed and mechanized in synchronous disconnection beneath the projection of a Colonial proclamation whose letters fall literally off the page and reconstitute as the dry trace of an animal skull. That diktat addressed the dangers of allowing Native American dances to continue, and instructed religious and administrative leaders to use all their offices to condemn, convert and restrict every dancer, emblem, artifact and instrument. It was projected only briefly before dissolving into snowflakes over the mourning Red Sky dancers.

As the narrative progressed in movement and image, trees reappeared, the frame views mapped footprints of cities from ever greater distances, outward into space, until we began again to see the stars, the figure of an elder in the stars, the constellations and then the galaxy glowing in the universe.

The dancers regained their sinuous connection and grace and, in the interpretation of these reviewers, claimed their personal and communal identities in solo and ensemble celebration.

Three brilliant musicians, who used electronic enhancements to embellish the unfolding narrative, accompanied the dance. Singer Orla Barlow-Tukaki is blessed with a supple, round, soprano; a huge range; and unerring intonation. She also doubled capably on drums, jew’s harp and bird whistles. Creating magnificent loops of sound, she offered keening monosyllables, most impressively in dramatically ascending thirds as tragedy unfolded, with red leaves falling from a dying birch tree pictured before a black sky.

Percussionist Bryant Didier and contrabass and guitarist Rick Sacks created stunning, swinging riffs; ethereal arpeggios; spatters and clouds of marimba pulses; and a stunning overlay of tom-tom pounding and sustained block chords beneath Barlow-Tukaki’s “ooh ooh ah” vocal pattern. This was ineluctable, summoning the forces of nature from which humans are powerless to separate. They adapted continuously to the choreography, with exquisite improvisatory skill and subtly shifting dynamics.

Your reviewers, gentle reader, were captivated and moved by the events of this day: the clarifying lecture, the traditional dances from the farthest edges of our coasts and beyond, the consecration of the land we danced on, and the legends that capture so compellingly the nature of life in the universe and our place within it. We deeply appreciate the Pillow’s aspirations for communication, enlightenment and inclusion, which, in this context, signify addressing the wrongs of Colonialism and cultural repression.