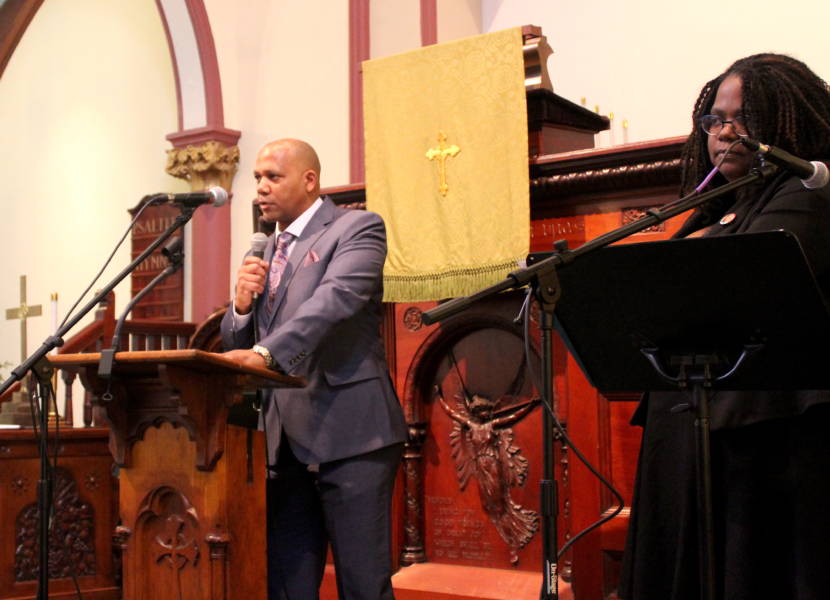 Great Barrington — It’s now officially an annual event. The festival honoring the birthday of the town’s most famous resident is in its second year.

“Great Barrington has done in the last year what it took us 75 to 80 years to get around to — which is to really warmly welcome W.E.B Du Bois back home,” Selectman Ed Abrahams said in greeting the approximately 150 people who on Saturday afternoon (February 23) assembled in the First Congregational Church, where Du Bois, one of the most prominent African Americans of his time, had worshipped as a child.

Du Bois, a groundbreaking scholar and civil rights leader, was born 151 years ago only about a one-minute walk away from the church, in a home near the Housatonic River, a watercourse for which he maintained a lifelong affection. He died in 1963 at age 95.

It was an afternoon of speakers and performers, ranging from scholars and academics to relatives, activists and musicians. And it was topped off by a birthday cake reception, complete with a rendition of Happy Birthday that somehow inspired even the tone-deaf to sing in key.

Two speakers stuck out. First, a impassioned poetry reading by Jaeden Alston, a 7th-grader at Great Barrington Rudolf Steiner School, of a piece his brother Kori wrote, entitled, “Imagine Being Black In The Berkshires.”

And there was a moving tribute to Du Bois by his great grandson, Jeffrey Peck, who spoke of the legacy Du Bois left behind, and of his greatness as acknowledged by many others, including Bernard Jaffe, Du Bois’ longtime attorney.

“He told me that my great grandfather was the most intelligent man he’d ever met and he said he was the greatest American he had ever known,” Peck said. “That statement gave me a sense of pride.”

See video below of the introductions and remarks, including those of Peck and Alston. Fast forward to 9:00 for Peck and to 17:00 for Alston:

Then there was the presence and the performance of highly skilled musicians themselves. The Hoping Machine, a folk musical group made up of activists and songwriters, sang and performed civil rights music.

Michael Whitney Brown and Wanda Houston, both legendary in the region (and beyond) for their gospel prowess, sang several duets. And Otha Day, a drummer, healer and activist, performed on the congas. Day received enormous participation from the audience in the group drumming experience he was offering.

See video below of Otha Day, drummer, healer and activist:

There were appreciations from a number of Berkshire County activists, including Dr. Frances Jones-Sneed, a professor emeritus of history, political science and public policy at the Massachusetts College of the Liberal Arts in North Adams. She has directed grants for the National Endowment for the Humanities and is co-director of the Upper Housatonic Valley African American Heritage Trail. Jones-Sneed is also editing the autobiography of 19th century minister Samuel Harrison and is working on a monograph about Du Bois.

Dennis Lee Powell heads the Berkshire County chapter of the NAACP. He’s a Pittsfield native who has had a longtime interest in rejuvenating the NAACP’s local history by highlighting the life and work of one of its founders, Du Bois himself.

And there was Kendra Field, associate professor of history and director of the Center for the Study of Race and Democracy at Tufts University. Field also served as assistant editor to David Levering Lewis’ W.E.B. Du Bois: A Biography. Lewis, a historian at New York University who won a Pulitzer Prize for the aforementioned biography, was honored Saturday along with Du Bois but was unable to attend.

See video below of the tributes to Du Bois from Jones-Sneed, Powell and Field:

There were also speeches and introductions by Randy Weinstein, founder of the Du Bois Center at Great Barrington, Gwendolyn Hampton Van Sant, who co-chairs the town-sanctioned W.E.B. Du Bois Legacy Committee, which was appointed last year and organized the event.

The committee works “to preserve and promote … Du Bois’ legacy as a scholar and activist for civil rights, progressive education, economic justice and equality,” according to its mission. The birthday celebration was part of the town’s second annual W.E.B. Du Bois Legacy Festival, which runs through Friday, March 1.

The event culminated in a cake cutting and the singing of happy birthday to Du Bois. Peck, Du Bois’ great grandson, performed the honor of cutting the cake.