A fly on the wall. Really. 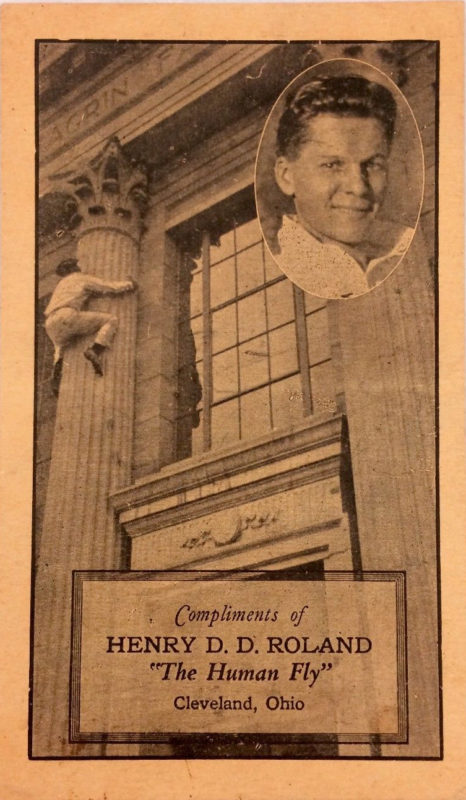 Dare Devil Roland showed some of the technique on this publicity card that would have attracted a crowd to witness him scamper up the wall of the Berkshire Block in Great Barrington in 1925.

Dare Devil Roland was a real and true fly on the wall in Great Barrington 90 years ago. There’s a two-sentence notice in The Berkshire Courier for July 16, 1925.

Roland, the weekly noted — alongside news of the opening of the Jitney Players at the Wyantenuck Golf Club and a personal appearance by Mildred Harris, the motion picture actress then summering in South Egremont, at the Mahaiwe Theatre to talk about picture-making — “gave an exhibition of climbing and balancing before a large gathering in front of the Berkshire block last evening. He climbed the face of the building and upon reaching the top he proceeded to thrill the crowd by doing a table and chair balancing act.”

Oh, wasn’t entertainment so much simpler in those days? Just scramble up the side of the building, and everyone in Great Barrington and their neighbors from Egremont, Sheffield and Monterey turn out to ooooh. (I know, they really had a little blood lust; they wanted to see if he’d fall.)

The fly was Henry (alias D.D., short for Dare Devil) Roland, who was born in Connellsville, Pa., in 1896. He gave up a career as an electrical welder to free-climb buildings all over the United States. He is said to have had 15,000 people watching when he scaled the Tribune Building in Tampa, Fla.

No numbers are given for his Great Barrington feat.

Roland did the same stunt in Indiana, Pa., a year-and-a-half before. The Gazette there noted, “after gaining the top [he] will put on a few thrillers in the form of table and chair balancing. Roland stated this morning, he will absolutely not use any ropes or assist himself by climbing from window to window, but will climb directly up the side of the building.”

A couple months after Great Barrington, he did the same act at the Wallace Block in Fitchburg, Mass.

He was a busker. He accepted donations from watchers after his stunts. 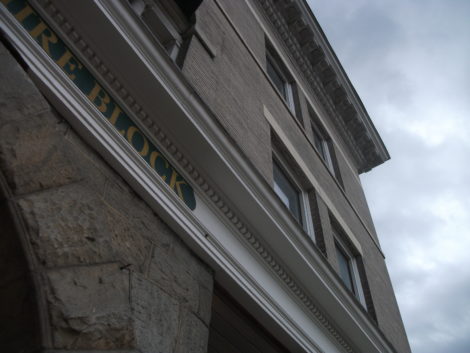 The next time you walk by the Berkshire Block, look up. How did he do it? He must have had fingers of steel — or Spider Man’s gooey web gel — to climb that façade. I’d have gone to watch. Photo: Bernard Drew

The performer chose an interesting building in Great Barrington. It’s still there, at the corner of Bridge and Main. The Berkshire Block was built of stone by George Ives in 1839. After it was damaged by a fire in 1895, it was rebuilt based on a design by the Pittsfield architect Joseph McA. Vance. The lowest level of the building, as you look at it today, is original quarried stone. The upper floors are new, of architectural grey brick. The Annex, home until last year of Foster’s Hardware, was of the same brick, designed by the same Vance. The Great Barrington Post Office was in the Berkshire Block from 1892 to 1937. New England Telephone had a switchboard on the second floor and Western Union had an office. John T. Harper’s pharmacy was long in the northern storefront. Other tenants over the years included haberdashers and jewelers. Hong Wah ran a laundry in the basement.

Roland flirted with the movies. He claimed to have doubled for Harold Lloyd in the motion picture Safety Last — the famous 1923 comedy in which the hero hung from a clock face, several stories above the street. (Other sources say another human fly, Bill Strother, and Harvey Parry doubled for Lloyd, uncredited.)

Roland only fell twice in his career. The first time he tumbled from the McAlpin Hotel in New York City, a convenient awning slowing his fall, though he was hospitalized.

His second fall was his last. He was performing a forward somersault in which he caught himself by the ankles on a trapeze. He had no safety net at the Ottway Fair in Greenville, Tenn. It was 1937. A gust of wind blew him askew. He hurled 62 feet to the ground. He left his mother, wife and daughter.