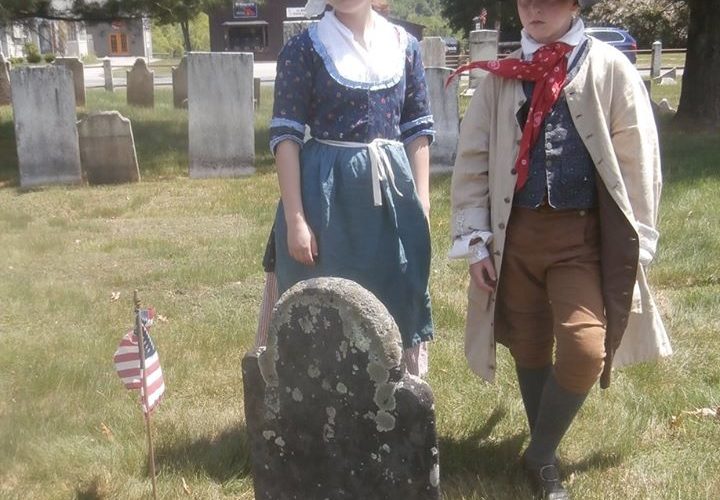 Great Barrington — Many graves of veterans are marked with medallions or flags in Mahaiwe Cemetery in Great Barrington. A few are overlooked, such as the stone of Lt. Davenport Williams of Sheffield. He was the 28-year-old son of the Rev. Stephen Williams of Springfield. His epitaph explains “who on his return from ye army died October ye 1758.”

The reason the stone says Sheffield is that Great Barrington was the northern parish of Sheffield until 1761.

Williams was in the colonial militia during the Seven Years War, which lasted nine years in North America. He saw service at Crown Point. Williams and other soldiers, according to Great Barrington Charles J. Taylor, fell victim to smallpox. In the same cemetery is the grave of another volunteer soldier, Oliver Chapin, who died of the disease at age 20.

Many of the very oldest stones in the cemetery are unreadable today.

If you rub some of the lichens off, you can still make out Ephraim Porter’s stone, though. He was a militiaman who died in a later conflict, Shays’ Rebellion. His grave’s inscription says he was “age 25.” He was the son-in-law of Deacon Israel Root, his wife, Anna, bore a son, Benjamin, after Ephraim’s death. Surviving only three years, Benjamin is buried near his father.

Timothy Abbott of North Canaan, director of Greenprint Collaborative, is one of the upper branches of the family tree of Lt. Thomas Ingersoll of Great Barrington (father of Canadian heroine Laura Ingersoll Secord, but that’s a whole other story). Ingersoll had charge of a company of farmer-soldiers that day in 1787. Abbott has researched the last skirmish of Shays’ Rebellion, which took place in a field near what is now called Rebellion Road in Sheffield, and visited area cemeteries looking for the graves of both rebels and defenders.

The Shaysites by Feb. 27, 1787 were well wound up, Abbott explained, their rage triggered by economic inequities following the American Revolution. Many of their number were bent on destruction. With Perez Hamlin of Lenox at the fore, they rampaged through Stockbridge (Elizabeth Freeman famously saving some of the Sedgwick family silver) and Great Barrington (where weeks before another group had menaced the local court). They headed for Sheffield in hopes of other regulators joining them.

But militiamen caught up and there was a violent confrontation.

Two Shaysites died, thirty were wounded including one named Rathbun, who died later.

Militiaman Porter was killed as was a Stockbridge man. Gen. John Ashley reported, “The loss on our side was two killed, one of them a prisoner with the rebels and probably killed by our fire….”

The Stockbridge man was Solomon Glezen, a school teacher. Abbott said his grave in that town’s cemetery is marked with a flag.

Porter’s stone has no marking.

Abbott and his daughter Emily and son Elias felt inspired to visit Porter’s grave this Sunday morning (May 24), in period costume, to place a flag and pay silent tribute to the forgotten soldier.

So many service men and women gave so much, and in these stones, we see for how long.

For a schedule of Memorial Day parades and observances in South Berkshire, click here.