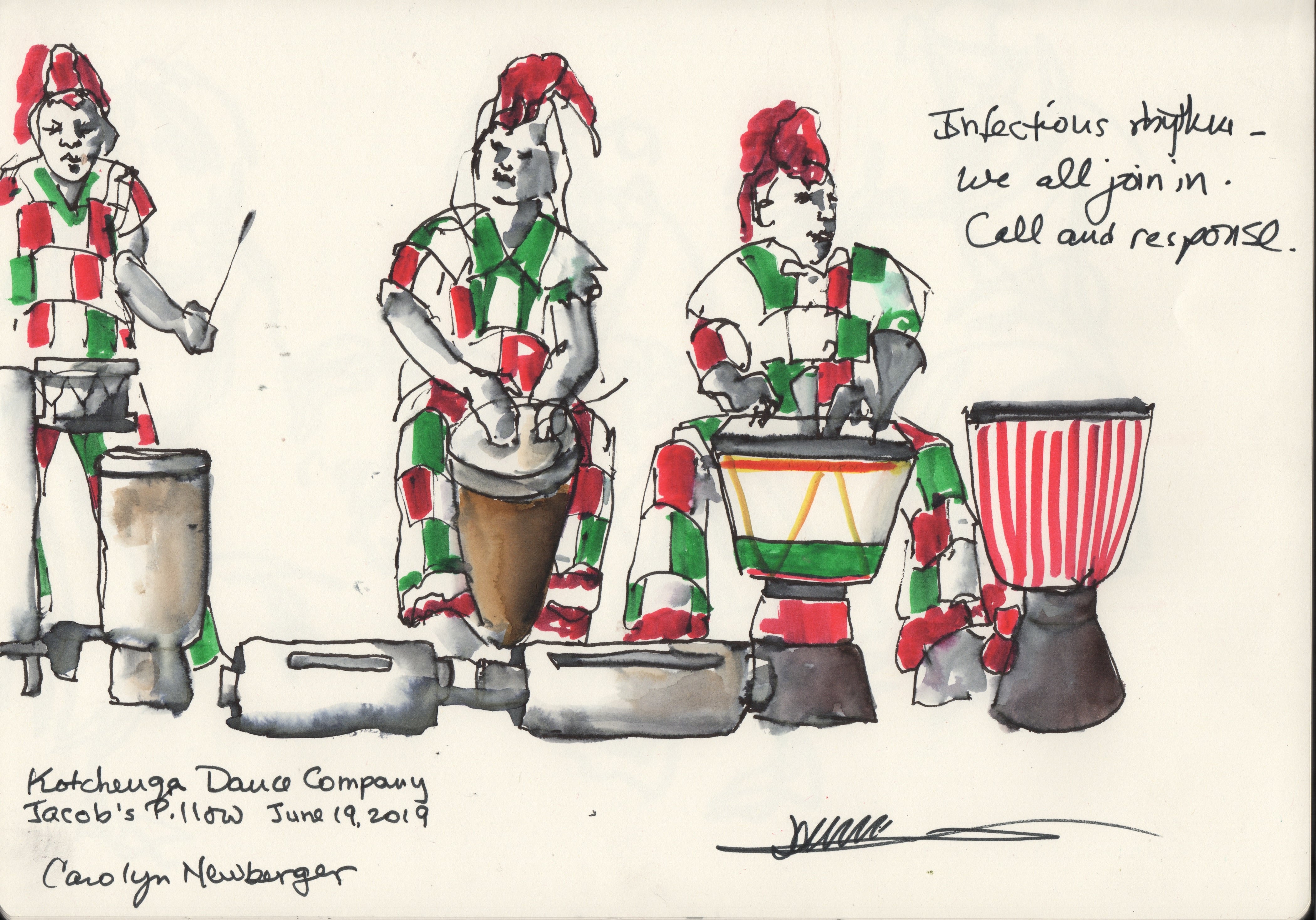 Becket — The honor of being the opening performance on the opening night of the 2019 Jacob’s Pillow Dance Festival went to Kotchengna, with an exuberant, joyful performance of traditional African dance from the Ivory Coast. To say the least, your reviewers, who lived for two years just north in Upper Volta, as part of the first Peace Corps delegation to this recently-independent former French colony, were eager to see what a contemporary African dance company, based in the Alvin Ailey Dance Theater in New York, might reinterpret in public performance.

On Wednesday evening, June 19, the skies parted and the rain stopped, permitting Kotchengna’s show to go on on the Inside/Out stage.

Vado Diomande founded Kotchengna in 1989. A former principal dancer and choreographer in the Ballet Nationale de Cote d’Ivoire, Mr. Diomande now teaches in New York in schools, and colleges, as well as the Alvin Ailey Dance Theater.  A warmhearted leader, accomplished drummer, singer, and dancer, he urged on and applauded his colleagues’ creative improvisations and delicious competitions in the course of an hour’s unending delight.

The gorgeous, huge dance floor, approximately the size of the Doris Duke Theater stage, but with neither curtains, scrim, nor backdrop, welcomes the audience to an exquisite forest dell with a stunning view of a distant mountain range. Where in an African village, the dance would go forth on the ground, with villagers of all ages participating in movement and song, driven by percussion and tonal instruments, here the “audience” was seated on thoughtfully placed wooden benches that settled naturally into the gentle slope of the woods.

Although here performed on stage, the real context of these dances is heart of the village, literally and figuratively. They may commemorate the milestones of life, such as the ritual introduction to the privileges and responsibilities of adulthood of children who have completed their long initiations; planting and harvesting; marriages and funerary celebrations; and for no particular reason than the joy of being together.

Villagers join in, dancing to the music with steps and motions that have been part of their lives for as long as they have had ears to hear and bodies to move. Instrumental music, movement, and singing aren’t separated from one another in “performances.” The singing frequently tells the history of the ethnic group, interprets its spiritual complexities along with masks that actualize animal and mythological spirits, and reinterpret contemporary events.

After having attended innumerable dances during our Peace Corps service, we experienced a delightful variation of the latter when our daughter was a Peace Corps volunteer. Visiting her in Cameroon at the time of Eli’s 50th birthday, we learned that the village was the home of a renowned musician. Would you like to meet him, someone asked after supper? Of course, we replied. With this generous guide, we walked a quarter of a mile through darkened paths (there was no electricity), past the mud walls of many family concessions. He knocked on the door, and a young adult, after hearing who we were, brought an older man carrying a small drum to the door. We shook hands, and he began to play with a curved wooden drumstick with a ball-peen head – and sang. I asked our guide if he could interpret the words for us. Without a moment’s hesitation, in French, he addressed himself to the task and said, “Who is this big, fat American guy who comes to my door after dinner and asks me to perform?”  There was more, with generous eye contact and delightful good humor spanning the gulfs of language and culture.

Here at Jacob’s Pillow, Kotchengna delivered in a series of dances, anchored in the virtuosic polyrhythms of the drummers and in chant and response.

When the show began, a single drummer came forward from the row of four across the rear of the stage, playing a portable drum and singing.

Midway through the performance, Mr. Diomande invited the audience to clap with the rhythms and to repeat elements of a song in the Senufo language, first with a single, elongated syllable that expressed a complex melodic line, then with two syllables, then with the whole phrase. Everyone did their best, although it was obvious that as Senufo is a tonal language, and the syllable and phrase was ripe with subtle tonalities and melisma, it was all but impossible to get our heads around it.

In the end, he asked us all to sing it ourselves. The audience and performers dissolved in laughter, and, surely, gained a deeper understanding of the depth and complexity of a splendid cultural tradition.

Several of the female dancers were Alvin Ailey Dance students, from diverse ethnic and geographical backgrounds – Swiss, French, Asian, African-American, white American – embodying the universality of dance and its power to connect us.

Not least of the satisfactions of this performance was the presence of many children, just as in an African village. They danced, cavorted, and as the ensemble was taking its bows before a well-deserved ovation, ran back and forth in front of the stage.

We left this world of village and dance glowing with the experience and grateful for the Pillow’s policy of free admission, which makes it possible for whole families to grow into global citizens of dance.