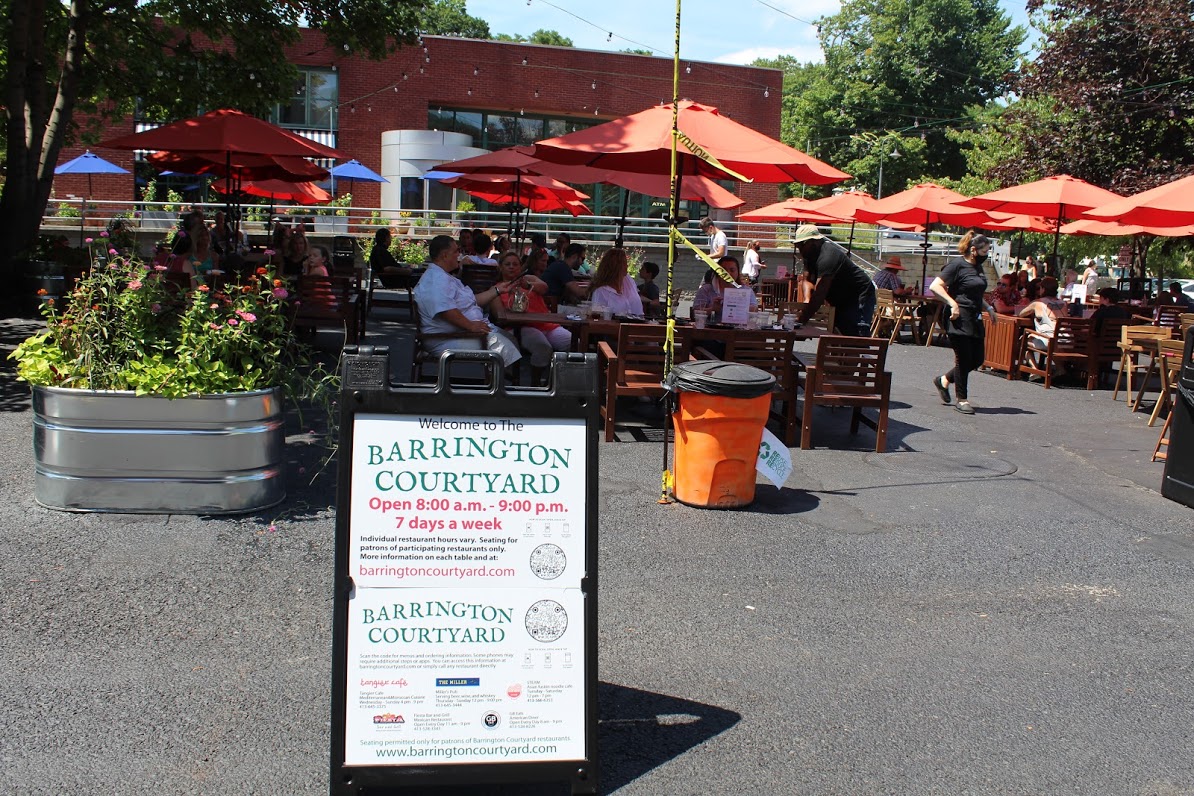 Great Barrington — Aside from the obvious priority of securing public health, the COVID-19 pandemic has presented an enormous challenge for the business community. In downtown Great Barrington, that invariably poses the question of how the many restaurants on Main and Railroad streets can survive, given the physical distancing guidelines imposed on indoor dining by the administration of Gov. Charlie Baker.

There have been some innovative ideas for downtown businesses, including nonprofit Community Revival Initiative created by Josh Irwin, the chef-owner of Mooncloud at 47 Railroad Street and Cantina 229 in New Marlborough. There is also a town initiative to close down all but one lane of Railroad Street to make room for additional outdoor dining for restaurants on that street.

In an age where indoor dining is impractical or discouraged, downtown restaurants have been hard-pressed to come up with the space needed to get their businesses going again. Enter Richard Stanley and his culinary tenants in the Barrington House.

The Barrington House is home to perhaps the greatest number of restaurants on Main Street. There is GB Eats, Fiesta, Siam Square, Tangier, Miller’s Pub, Taqueria Azteca and STEAM. They’re all popular and were suffering during the pandemic. Behind the Barrington House is a small, permit-only parking lot used by tenants residing in the upstairs apartments.

Stanley was approached by some of his restaurant tenants, all of whom have limited space for outdoor dining. They can set up a few tables on the sidewalks in front of the entrances to their eateries but not enough to achieve the economy of scale needed to recover and start turning a profit again.

“It was obvious that the key to getting occupancy at the restaurants was outdoor dining,” Stanley said in an interview. “And our restaurants had minimal ability to do it.”

And so, about three weeks ago, Barrington Courtyard was born. Six of the restaurants operating on the first floor of the Barrington House are participating in the joint effort, something Stanley calls a “multi-restaurant outdoor dining experience in the heart of Great Barrington.” There’s even live music on the weekends.

The Barrington Courtyard website contains operating hours and links to all six of the participating eateries: Tangier; Miller’s Pub, GB Eats, STEAM; and Fiesta Bar & Grill. Those arriving at the courtyard can open the camera of their mobile phone and scan the flowcode on the sandwich board. The scan will allow you to open the menus on your phone. Table service is available for all the restaurants except for STEAM, which doesn’t have a wait staff.

Baba Louie’s used to be housed in the Barrington House but last year relocated to Railroad Street in the former Allium Bar & Restaurant, which is located in another building Stanley owns.

Baba Louie’s owner Paul Masiero had already worked out an arrangement with Stanley whereby he could set up outdoor dining in the alleyway between the Baba Louie’s building and the Triplex Cinema, yet another building Stanley owns. The new Baba Louie’s outdoor space is adjacent to the Barrington Courtyard. The spaces are visible from each other.

“How do we get more revenue for the restaurants?” Stanley asked rhetorically. “But the second question really is my insidious idea about making Great Barrington the outdoor dining capital of Berkshire County.”

The Barrington Courtyard could go a long way toward realizing Stanley’s dream. But there’s also lots of outdoor dining going on in Lenox, the residents of which, at a town meeting in June, unanimously approved a proposal to streamline licensing for outdoor dining.

All the eateries have to face the reality that some people are confused as to which restaurants are involved because of the courtyard’s location next to the Mexican bar and grill.

At Fiesta, owners Nestor Perez and Sandy Sofa report that they are very pleased with the effect their participation in the courtyard project has had on their business.

“It has worked out very well,” Perez said, adding that his business is back to about 80% of what it was before the mandatory shutdowns in March.

Stanley said he would like to see the experiment continue until Columbus Day weekend (officially recognized in the town of Great Barrington as “Indigenous Peoples Day”).

“Nominally we’re talking Columbus weekend, but in a way it will be weather-dependent,” said Stanley. “I’ve already bought some outdoor heaters so we’re getting ready for that aspect of it and — I don’t know — if it’s incredibly popular, maybe it’ll go to Thanksgiving.”

“It’s phenomenal,” said Betsy Andrus, who heads the Southern Berkshire Chamber of Commerce. “These businesses are smart enough to understand they’re going to have to do something different.”

“Collectively, everybody said, ‘We’ve got to do something,'” Andrus said.

Stanley would like to attract even more people to the courtyard. Asked how he might do that, the businessman, in a satirical reference to the oft-overcrowded Bash Bish Falls, scratched his head: “All I’ve got to do is put a waterfall in somehow.”