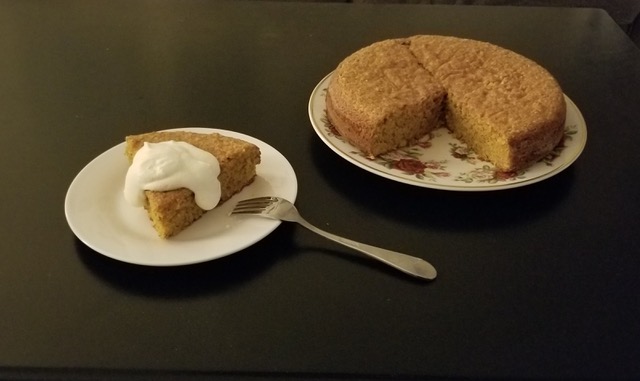 I don’t usually do a lot of baking, but while being quarantined, I’ve stepped up my game. However, I’m much more comfortable cooking than baking, as cooking comes to me naturally. However, while in lockdown, I’ve decided to continue expanding my horizons and my waistline by working on my baking chops. I’ve played around with no-knead breads and have developed a very substantial 100% whole wheat bread I’m mostly satisfied with. I’ve been making my Irish wheaten bread and digestive biscuits because I miss having them while not in Ireland. The Lovely Lois and I should be in Ireland now as I write this, but there’s this thing called the coronavirus keeping us sequestered in this loony bin called the United States.

Back in the sanctuary of my own little comfortable world of food and my recent explorations of baking, I’ve been thinking why people tend to prefer either cooking or baking. In my own informal polling of my friends, almost all have expressed a preference for one or the other, but mostly cooking. I heard a few people express the drudgery of cooking and a few enjoy baking for sharing. No one mentioned the drudgery of baking or expressly spoke of sharing their cooking. Finally, there were comments about each allowing for a creative outlet, a sentiment with which I can certainly agree.

I think there are several reasons for people’s comfort level being greater with either one or the other, but I believe it’s mainly related to personality traits. In my case, I’m impatient, a firm believer in instant gratification, a tad arrogant (a mandatory trait for a chef) and have never been particularly good at following instructions. I love learning techniques, but throughout my life, I’ve often found explicit instructions tedious and confining. On the other hand, I’ve known many people needing structure who feel lost while cooking without the explicit instructions of a recipe to follow.

One of those people was my mother, who was a home economics teacher when they were still called that. She was also a lab technician in a chemistry lab as a young woman, which she told me she loved. She taught me any number of valuable kitchen techniques, which I readily adopted. However, I must admit, though I’ve always loved my mom, I had a difficult time cooking with her, as her approach to cooking by following recipes explicitly was anathema to me. For example, when she was making a white sauce, she would determine how much sauce she needed, measure the amount of milk, and carefully measure the butter and flour for the roux needed to thicken the sauce to the correct consistency, whereas I almost always eyeball it all.

Some of the differences come from my early days as a cook in restaurants where speed was essential. We would rarely have time for all those measuring cups and spoons! Besides, those little things could end up anywhere in a hectic restaurant kitchen except where you were looking for them. One of my more extreme non-baking chef friends during those days, who was setting up a new kitchen, didn’t think to purchase any measuring cups or spoons other than a gallon measure. When my baker wife went to help him with his opening, she had to explain to him she needed to use exact measurements for her baking and shamed him into buying some measuring cups and spoons.

My chef friend, like I, was taught to use the palm-of-the-hand method to measure for preparing dishes like soups or stews. We all used a pinch of this or that on the cooking line when seasoning an individual dish that was going out to a customer. I still rarely use measuring cups or spoons when cooking except for cooking grains and the like.

I can distinctly remember, in my early days in a hotel kitchen, a strict and demanding sous chef taught me the palm-of-the-hand method of measuring when I was as green as green could be. She instructed me to hold out my hand so she could demonstrate by pouring salt into my palm. She immediately scolded me for holding out the wrong hand, but then caught herself when she realized the absurdity of using one hand rather than the other. We had a rare good laugh together.

A few years later, wanting to become a more complete chef and learn more about baking, I apprenticed with a brilliant baker who did all the baking for his small bakeshop in Vermont. His pastries were classic French and exceptional. His sourdough breads were just the right amount of crusty and chewy. However, I took exception to his pizza, which he made in order to sell the scraps of his leftover bread dough. He admittedly had no clue how to cook, nor any inclination to learn. His idea of making pizza sauce was mixing handfuls of dried Italian herb blend from a can with a large restaurant-sized can of pureed tomatoes. The pizza crust was great, but the sauce was truly gruesome.

I can’t say I was a particularly good baking apprentice; even small commercial baking didn’t come naturally to me. I can say I learned valuable lessons I used later in my career and even at home. For his part, I know I was more distracting than helpful. He eventually had to shoo me out the door even though we enjoyed each other, as he confessed he had a bakery to run. The year was 1978 when the Coneheads were hot on “Saturday Night Live,” from which we would recite lines in the bakery as we were working. Before I left, he wanted to present me with a diploma, so he scrawled his certification on a small, greasy paper plate, which I still have, that reads, “If anyone asks, I am from France.”

Now, let’s take my admittedly sophomoric, pseudo-philosophical posturing and disconnected ramblings and apply them to how people’s personality traits relate to paths taken by my second favorite pastime/obsession with music. Please bear with me while I make a broad analogy, as much because I know you really have nothing better to do if you’re still reading. The premise is bakers share personality traits with classical musicians and cooks with jazz musicians — crazy, huh?!

It doesn’t mean there isn’t crossover. Yo-Yo Ma, for instance, is considered one of the greatest classical musicians to have ever lived, but he’s collaborated on several stellar projects involving musical improvisation, the forte of jazz musicians. However, he’s a genius and I’ve found us mere mortals tend to stay in our lanes to one degree or another. With that being said, I read an interview in which Yo-Yo Ma confided he didn’t feel improvising was his strength. May we all have such weaknesses.

As a natural cook who made my living as a chef for many years, I tend to look at cooking recipes mostly for ideas about technique and choice of ingredients. It’s rare I follow a cooking recipe to the letter, and I may change direction altogether as I’m cooking — jazzy, right?

When I have the urge to bake something new, I usually need to follow the recipe a couple of times before I really begin to understand what the outcome should be. I’ll call upon the techniques I’ve learned over the years such as the proper method to fold ingredients with beaten egg whites so as not to deflate them. It’s knowing how each step of the recipe should be put together, repetition and feel that make all the difference in baking. Think of that cake you’re baking as a sonata.

At the end of the day, preparing food can be as much a communication with your audience as playing music. To a greater or lesser degree, I think of everything I create — whether it’s a meal, a slice of cake or a cut of cheese — as something that may provide comfort, joy or raise awareness of what’s being consumed. I know from conversations with my musician friends that they approach their music in much the same way. It’s bringing comfort, joy and awareness into people’s lives while providing a creative outlet that motivates us. It’s why we all continue doing what we do. In most cases, if doing it for a living, it sure ain’t because of the money!

There are chefs who excel in both baking and cooking just as there are musicians, such as Yo-Yo Ma and Peter Serkin, who excel at interpreting classical music scores and improvising over a jazz chart. One of those chefs was the late, great Italian chef, teacher and cookbook author Marcella Hazan. As proof of her baking prowess, I’m including one of my favorite recipes of hers.

This recipe is adapted from Marcella Hazan’s brilliant cookbook “Marcella’s Italian Kitchen,” a cookbook I read for inspiration and, yes, instruction. My tad bit of arrogance doesn’t get in my way when receiving instruction from a great chef such as she.

From the first time I baked this cake, it was a revelation. As much as almost everyone loves a good old-fashioned carrot cake with cream cheese frosting, this recipe is not that. It’s perfect as a dessert, a dolce, when following an Italian meal structure. It’s light, chewy, moist, nutty and just sweet enough. Served with a coffee permutation followed by a glass of grappa or limoncello, it will have you leapfrogging over the coronavirus into a virtual Italian trattoria. It’s also perfectly satisfying any time when looking for a lighter baked dessert, particularly on a summer’s evening when we tend to eat lighter fare. I can even attest to the satisfaction of having it for breakfast instead of a muffin.

I’ve baked this cake numerous times over the years and as I look at the recipe, I can’t remember how we used to cook or bake before we had food processors. With the food processor, I’ve learned to take care with steps such as grinding the almonds and sugar together as finely as possible without straying into making it a paste. Mixing the ingredients thoroughly before gently folding in the beaten egg whites is a critical step as well. It’s a recipe requiring patience and is a good practice for me. This cook has found following these steps precisely as critical to elevating this cake from very good to heavenly.

If you find you love this recipe and would like to share it, feel free to instruct the person you’re sharing it with to skip the gibberish above and go right to the recipe.

This recipe makes six to eight portions and holds up quite well for a couple of days if kept tightly covered.

Cool on a wire cooling rack and allow to cool to lukewarm before removing from the springform pan. Cut into six to eight portions and serve with a dollop of whipped cream.