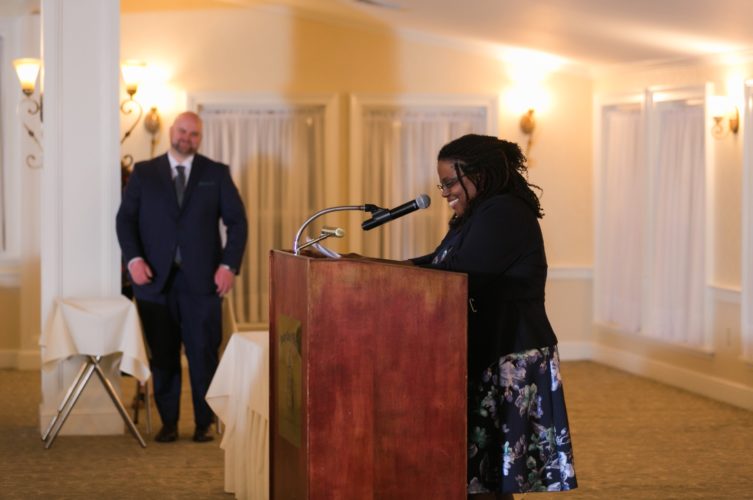 As her husband, Sam, looks on, Gwendolyn VanSant speaks May 6 at a reception held at the Country Club of Pittsfield honoring her as Berkshire Business and Professional Women's 2019 Woman of Achievement. Photo: Tricia McCormack Photography

Great Barrington — Vanessa LeGrande first met Gwendolyn VanSant   a decade ago—the pair got to talking at the fitness facility where LeGrande was working and the idea of a barter took shape, one that would capitalize on the women’s respective strengths: LeGrande would help VanSant create a fitness regime and, in exchange, VanSant would teach LeGrande Spanish. With myriad commitments pulling the pair in different directions, neither woman was able to prioritize herself in order to make good on the deal. While the barter never worked out, the friendship blossomed nonetheless. Last Monday evening, LeGrande was one of the first in a long line of friends, colleagues and admirers speaking on behalf of VanSant, who was honored by Berkshire Business and Professional Women as the 2019 Woman of Achievement for her outstanding leadership, creative energy, and numerous contributions to the Berkshires and beyond.

“You are an amazing power of example, not only to the little black girls, but to the little white girls, and the Chinese girls, and the Hispanic girls,” LeGrande said in her impassioned remarks at the Country Club of Pittsfield. “I thank you for them, I thank you for me, I thank you for letting me know by your power of example that there is nothing too silly for me to say or do,” she added. “It is never too late.” LeGrande, who spoke on the heels of District Attorney Andrea Harrington and Multicultural BRIDGE co-founder Bob Norris, recognized her friend as a person of amazing character, integrity and pure, humble honesty—one who has paved the way for so many in the community. In a follow up interview, LeGrande elaborated: “Gwen, through conversation, has helped me to understand that I should no longer remain silent for fear of what change might bring. In fact, if I do that, I help stagnate the possibility of change. The people who have strong words and who know how to use them, if they are continually backed down from the same baseline society, then how do we bring about change?”

In a printed statement, members of the BRIDGE Accountability and BRIDGE TRJ White Caucus expressed their gratitude for VanSant’s compassionate and unwavering leadership, acknowledging her revolutionary work in the Berkshires and beyond: “The framework for working in community and in accountability that Gwendolyn has created and holds is a call to action. It is a call to change how we live and relate—to practice equity and justice in ways that are woven into the rhythms of our daily lives … For many of us, coming to understand our place within systems of oppression and accepting responsibility to unlearn our own racism and internalized white supremacy is humbling, challenging work. We have learned and are still learning so much about the history of and current manifestations of race and racism—on a cultural level, but also a personal one—and we are grateful for all the ways Gwendolyn has guided us in developing an ability to recognize, address and act. As a teacher, Gwendolyn brings a level of dedication and skill that goes unmatched, as well as immeasurable honesty, strength and passion.”

VanSant, the founding director of BRIDGE as well as the equity and inclusion team lead at Changemaker Strategies (formerly Imagine Philanthropy), works at the intersection of diversity leadership, equity and inclusion, and strategic planning. She has founded several initiatives based in the principles of equity and justice, the inherent dignity and worth of individuals, and our interconnected web of humanity. She serves as the vice chair of the town of Great Barrington W.E.B. Du Bois Legacy Committee, and she is on the board of the Women’s Fund of Western Massachusetts and UMass Action Network. A skilled community organizer, VanSant is also a well-recognized thought leader on gender equity, racial justice and reparations.

VanSant is a longtime activist. In 2018, she was selected by the Massachusetts Commission on the Status of Women as one of the Commonwealth’s “Unsung Heroines” and named a finalist in Executive Leadership in the 2018 Berkshire Nonprofit Awards. In January/February 2018, VanSant co-curated the commissioned Great Barrington W.E.B. Du Bois Legacy Festival in partnership with Randy Weinstein and her BRIDGE team. In spring 2017, she spearheaded the countywide campaign and coalition, “Not in the Berkshires” and helped craft and pass her town’s Trust Policy, a step toward a statewide Safe Communities Act. And in 2016, VanSant served as the founding director of equity and inclusion at Bard College at Simon’s Rock, an institution of which she is an alumna.

In her own remarks, VanSant said: “ I could not be more thrilled and humbled to be honored as a Woman of Achievement and to support this cause! It is near and dear to my heart and my story.” She went on to address: “Most importantly, being the first African-American woman honored by Berkshire Business and Professional Women, I see this as an opening of the gates.” Her reference to “this juncture in our political and cultural history” proves instrumental in the work of BBPW, an organization “endorsing the need for a mission that promotes equitable representation and reflection as well as mutual respect for our Berkshire community of professional women while championing everyone’s humanity.”

Perhaps the most formidable portion of VanSant’s remarks came when she laid a blueprint for others to follow in making their own marks in this important work:

“So, when you see evidence of a systemic or cultural injustice, you have to learn to shout it on the mountaintop. By doing this you begin to articulate your own intention towards a safer, more just, and more equitable society for women and girls; for people who have been historically underrepresented due to race, religion and ethnicity; for folks living in poverty; individuals living with disability or chronic illness and for newly arrived immigrants, just to name a few. This is how you make beautiful things happen. This is how you catalyze change and inspire courage over fear on behalf of your community. You owe it to yourself, your families and neighbors, as well as to generations you will never meet to use your voice.”

This is a sentiment LeGrande returned to when she and I spoke. “If we are all honest with each other, in terms of guiding one another; we would realize we all mirror one another. If we would only look into that mirror—for the good, the bad and the ugly—we grow and we become better people.” This is something LeGrande has been able to do, in no small part, thanks to the inspiration of Gwendolyn VanSant.

Each year the Berkshire Business and Professional Women accepts nominations for the annual “Woman of Achievement” award. This award honors a Berkshire County woman for her considerable achievements and outstanding commitment to the Berkshire County community. Proceeds from the May 6 event will go toward the career advancement scholarships that BBPW awards each year. This past September, the organization was able to grant scholarships totaling $12,000 to 12 eligible applicants.