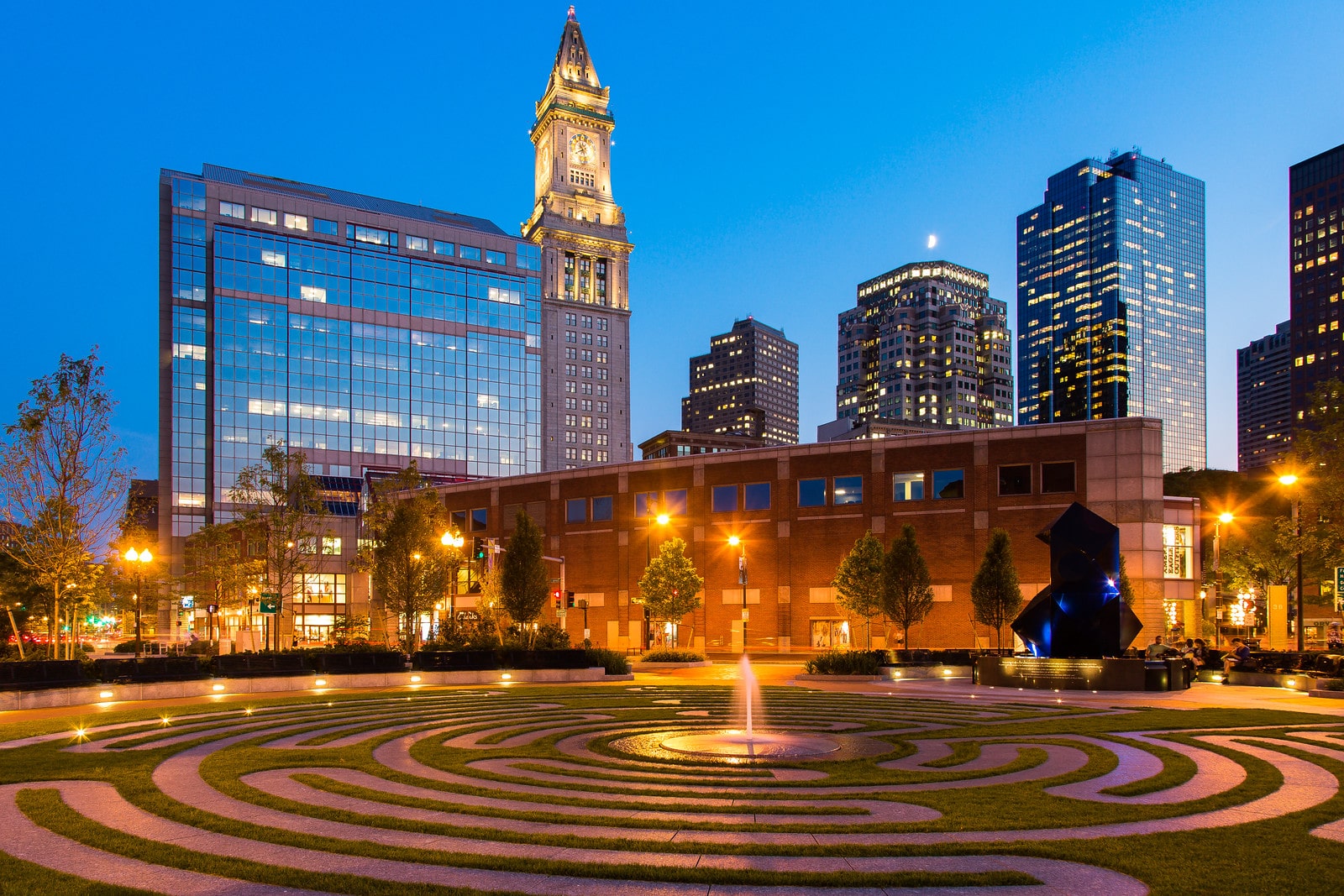 Night time photograph of the Labyrinth at the Armenian Heritage Park on the Rose Fitzgerald Kennedy Greenway in Boston, MA. The abstract memorial with inscription is at the upper left. Photo courtesy Armenian Library and Museum of America

I recently read a 2015 novel called “Orhan’s Inheritance” by Californian Aline Ohanesian. It’s such a fine first book that Ohanesian won the PEN/Bellwether Prize for Socially Engaged Fiction that year. When a Turkish grandfather in Anatolia dies and leaves the family home to a woman nobody knows, his grandson Orhan is dispatched to find her and winds up in an Armenian-run nursing home in California. Unable to set the book aside, I found myself dragged backward into 1914 and historic wounds I knew little about. After waves of massacres of Armenians from 1894 to 1896 and again in 1909, the Ottoman Turkish government murdered or removed its entire Armenian population, beginning with intellectuals and members of its liberation movement under cover of the chaos of World War I. The final estimated death toll is 1.5 million people. To this day, Turkey refuses to call it genocide. At the time, the government branded Armenians as subversives, shrugged, and said, “terrible things happen in wars,” as if a million and a half people were just “collateral damage.” It led me to a months-long investigation of how these sorts of inhumane and illegal horrors keep happening.

Before Americans retreated from assuming unsupervised play in the fresh air was a norm for children, we could pass bullying, factional struggle and the falling apart and reforming of “friendly” groups several times a day in any street or backyard. Because human behavior tends to remain recognizable in all times and places, we continue to bump into them in school yards, playgrounds, and prototypically even in our preschools as well as in offices and other adult institutions. Three thousand years ago, the Middle East was inhabited by ancestors of people continuing to struggle with each other today. Among them were Armenians, who lived mainly on the Anatolian plain in the shadow of Mount Ararat, and claim to be descendants of Noah. They had their own kingdom among the Greeks and the Persians before the birth of Christ.

In 1 A.D., Armenia came under full Roman control, and began leaning toward Western philosophical, religious and political ideas. It became the first nation to adopt Christianity as its state religion. In the fifth century, Armenians resented re-imposition of Zoroastrianism, endured a major military defeat by the Persians’ “immortals and elephants,” followed that with their own lengthy guerilla wars of independence, and finally signed the Treaty of Nvarsak in 484 A.D. to guarantee all Armenians religious freedom.

The Middle Ages were volatile for everyone in the region. Muslims conquered Persia, including its Armenians, and Byzantines took much of the remaining territory of Armenia, but Emperor Heraclius and the rulers who followed there were of Armenian descent. The state they administered was often called the Armenian Dynasty, and produced a Golden Age that had a great influence on the Byzantine Empire. It was overlapped by the Kingdom of Cilician Armenia. Cilicia sometimes supported Europe’s Crusades against Islam, and sometimes didn’t. While successful enough to be courted by surrounding powers, Cilicia was internally torn between pro-Catholic and anti-Catholic factions that weakened it so that the Mamalukes of Egypt eventually destroyed it. In the 1600s, there was one mass deportation accompanied by a scorched earth policy during a war between Persians and Ottomans that left at least 150,000 Armenians dead and their towns and farms laid waste, beginning a dubious pattern of making Armenians the previously mentioned “collateral damage.”

An exhibition at the Metropolitan Museum of Art in New York, on view from Sept. 22, 2018, through Jan. 13, 2019, was called “Armenia: Art, Religion and Trade in the Middle Ages.” It featured room after room of glorious illuminated manuscripts, sculptures, maps, paintings, site photographs of distinctive Armenian architecture, and khachkars (stelae of crosses carved in stone). Although its distinct Christianity continued to face eastward, Armenia had a strong presence along the Silk Road, so Eastern and Western images tended to meld in the show. One saw the art of a confident, adaptable, cosmopolitan people.

Wherever we look, past and present, competition is a constant among human beings. Like individuals, countries want to stretch and develop, yet it’s not to the advantage of autocratic governments to encourage ambition and education among their people. By the 1900s, life in the dictatorial Ottoman Turkish Empire became tenuous for Armenians because generations of them had studied, traveled, joined the professions and the arts, and grown to be owners of successful businesses. By the late 1800s, they had even become ubiquitous in the government at Constantinople. Their successes embarrassed Muslim fellow citizens, compounding resentment based on the viewpoint of Islam that Armenians were infidels. Jealousy and fear of “the other” led to the terrible troubles that occurred in the late 19th and early 20th centuries.

Today, many Armenians continue to flee socio-economic problems from Russia to the Middle East, still going into diaspora all over the world. Their largest population in the U.S. is in California, but it’s well known that among the many Armenians in the Northeast (it’s estimated that there are between 50,000 and 70,000 Armenians in the Boston area alone, and New York boasts thousands more.), there’s a large and prominent population in Watertown, Massachusetts. Watertown is proud of its Armenian Library and Museum of America, a handsome, four-story building that was once a bank, which houses the largest collection of Armenian artifacts outside of Armenia.

An elegant, inspirational Armenian Heritage Park was opened in downtown Boston in 2012. The inscription on the monument reads:

“Boston and the Commonwealth of Massachusetts have offered hope and refuge for immigrants seeking to begin new lives. This park is a gift to the people of the Commonwealth and the City of Boston from the Armenian-American community of Massachusetts. This sculpture is offered in honor of the one and one half million victims of the Armenian Genocide of 1915-1923. May it stand in remembrance of all genocides that have followed, and celebrate the diversity of the communities that have re-formed in the safety of these shores.”

Once again, a fascinating book has made me aware of another corner of my own ignorance; and this time it has introduced me to the centuries long backstories of friends and neighbors. The continuing inclination of people to abuse each other is confounding. Yet I’m reminded of the miracle of America, however flawed, which stumbled into being a refuge from the world’s consistent cruelties not out of altruism, but by virtue of needing immigrants to fill and develop a vast land. What’s most amazing is that despite modern struggles, it persists.