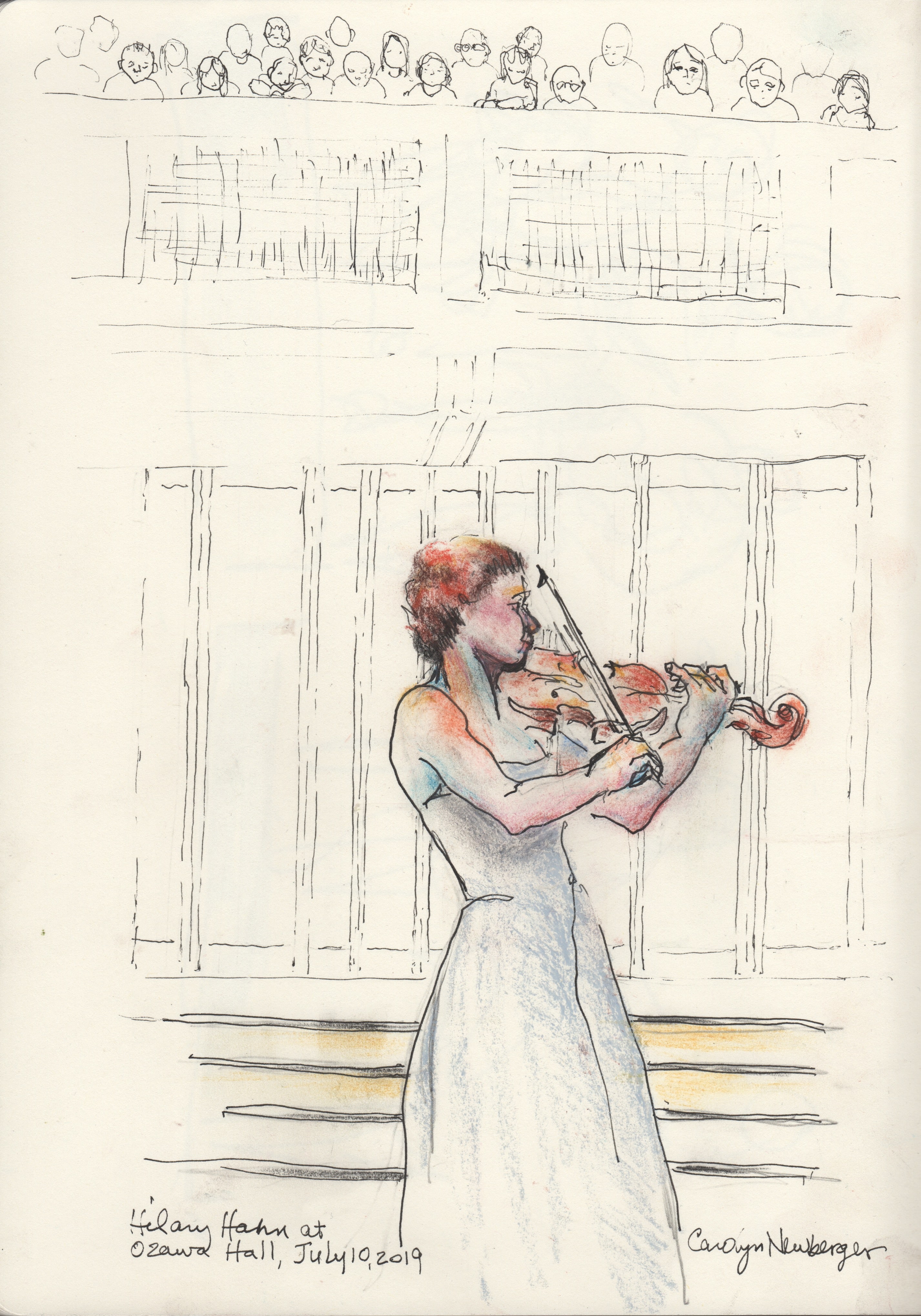 Hilary Hahn’s stately presence belied the profound emotion that underpinned the impact of her virtuosity. Drawing by Carolyn Newberger

In this eloquent and moving solo recital in Ozawa Hall on July 10, Hilary Hahn illuminated the both the elegant outer structures of three of J.S. Bach’s iconic solo works and their interior voices. At times, when one closed one’s eyes, it seemed as if there were separate violin virtuosos performing these multi-part masterpieces. Her surpassing technical accomplishment was augmented by:

It is well to note that Bach was one of the greatest organists, and as serious students of the instrument come to know so well, the keyboards of the king of instruments are surrounded by an array of “stops,” which activate pipes that sound the particular overtone series one chooses. In Ozawa Hall, Ms. Hahn exploited its echoes astutely. Her solo instrument’s lingering resonances bore a resemblance to what one hears, say, in the 10 seconds after the last chord sounds in the Saint-Sulpice in Paris or in the Minster in York.

It is not an exaggeration to suggest that, for many devotees in the audience, this experience was indeed like being in a cathedral, with the voices coming from the stage reaching to the heavens above as well as into their hearts. Ovations followed each piece, and the clamor at the end provoked a single, quiet encore. Afterward, a line three abreast extended from the autograph table just outside the hall across the lawn to the main gate. People had come from far and wide. The Tanglewood Glass House stores sold out of her CDs.

In the opening Sonata in A minor, Bach’s repeated low notes, or pedal point, allowed an array of dissonant intervals, including seconds, sevenths and ninths to glide by as lines collided in increasing intensity before culminating in a single-line cadenza. Ms. Hahn emphasized the bottom sufficiently to avoid a grating effect, and she decorated Bach’s conservations between inside and outside voices with distinct vibratos. When double-stops were achieved by pulling the bow across the lower strings to the upper, these were voiced powerfully but sweetly, avoiding the easy dramatics that stars of the stage are vulnerable to exploit.

In the fourth, Minuet movement of the Partita in E, there are actually two such dances. The first, popular in its own right as a vehicle for student recitals, is followed by winsome variations in the second — not exactly a mini-Goldberg, but a challenge nonetheless to create for each a distinctive character. Ms. Hahn brought them out with astonishing freshness, almost as if she’d never played the piece before.

Listen, dear reader, to this searching performance of Bach’s Violin Sonata in C that Ms. Hahn performed after the intermission. She was just 18 when she performed it in 1998, but you can hear the same kind of artistry — of a mature master — that we witnessed July 10. Note, in the deeply affecting Adagio that begins the piece, how adroitly she expresses the two opening lines. The first one starts with a repeated C that accustoms you to the fundamental tonality. It’s followed by one that begins on D. This major second is surely dissonant, but it’s not harsh, as Ms. Hahn sets it on its logical way as an engaging countermelody.

In the Fuga, a veritable master-class in fugue writing by the master, the principal figure sounds like an upside-down version of the nursery rhyme “London Bridge is Falling Down.” Ms. Hahn plays with its variations, inversions and curling interstices, opening a Rubik’s cube of revealing dynamics that culminate in a rising, brilliant, dramatic crescendo.

The presto that ends the piece is burning, almost unbelievably fast (you had to be there to believe the tempo), and swinging. It brought the house down.

Now a mother of two young girls, this is Ms. Hahn’s final all-Bach concert before taking a year-long break. This isn’t her first break, and it will not be without important music projects, but it will allow her to decompress and recharge.

Brava to Ms. Hahn for allowing herself to step off the performance express and to switch to a gear in which she can allow both personal refreshment and new creative connections to happen. As artists ourselves, we know well that divergent pursuits, both within and across realms of endeavor, can energize and expand work in each one, as well as protect against burnout. For an artist with the intensity of focus, emotion and creativity that Ms. Hahn brings to her performances, we can appreciate why such breaks would be essential.

In a lovely preview of this concert in the Boston Globe, music critic David Weininger quoted Ms. Hahn on the unexpected and now essential importance of separating herself from nonstop immersion in instrumental performance:

“A decade ago, when Hilary Hahn was 29 and one of the most acclaimed violinists in the classical world, she decided to take a break. Not a few weeks or a summer away from performing to recover from an injury or work on a new piece. Instead, she took six months off to decompress and not be an internationally renowned soloist. ‘Taking time just to take time,’ as she put it in a recent phone interview.

For a while, Hahn didn’t touch her violin or listen to classical music. She took a road trip and got caught up on all the Top 40 radio she’d been missing. One day, while driving, she turned on a classical station and happened on the Saint-Saens “Organ” Symphony. The experience of hearing those sounds — her first contact in months with a musical world that had been her world from a young age — was so powerful that she pulled the car over and texted everyone she knew to tell them to tune in. For the first time in as long as she could remember, ‘I was listening to music as sound and not as a score that my brain was interpreting from what I was hearing,’ she said.

‘I wasn’t analyzing it, I wasnʼt imagining playing it; I was just listening to these magical sounds,’ she continued. ‘And I think that was so helpful for me as a musician. It gave me a perspective on what music is really about. It helped me stop analyzing how to get there, and just be there. That was a powerful moment that I can still kick into when I need to. I can turn off the musician part of my brain and be in whatever sounds are happening.’”

Our beloved former Boston Symphony Orchestra concertmaster Joseph Silverstein recognized Hilary Hahn’s extraordinary talent when she was a girl. After his passing in November 2015, Ms. Hahn recalled that moment when she performed at a celebration of his life at Ozawa Hall: “When I was thirteen, Joey invited me to perform with him in one of my first gala experiences: A New Year’s Eve concert with the Utah Symphony.” We have it on good authority that, at that Salt Lake City gala, he told the audience that she was the star of the future.

Silverstein’s support of Ms. Hahn was in keeping with his commitment to young people throughout his career, including Berkshire Children and Families’ Kids 4 Harmony program here in Pittsfield and North Adams. For several years before his death, he performed at the Kids 4 Harmony annual gala, both to support the program and as a way of mentoring the children. Several of those children performed July 12 in Studio E at the Tanglewood Learning Institute, and on Monday evening at the Kids 4 Harmony gala at Berkshire Community College, Emanuel Ax will be performing Mozart with Kids 4 Harmony musicians.

We cherish the deep connection of the BSO and Hilary Hahn and wish her a fulfilling replenishment during her sabbatical, and we thank her for choosing Ozawa Hall to say goodbye. We can’t wait until she returns.