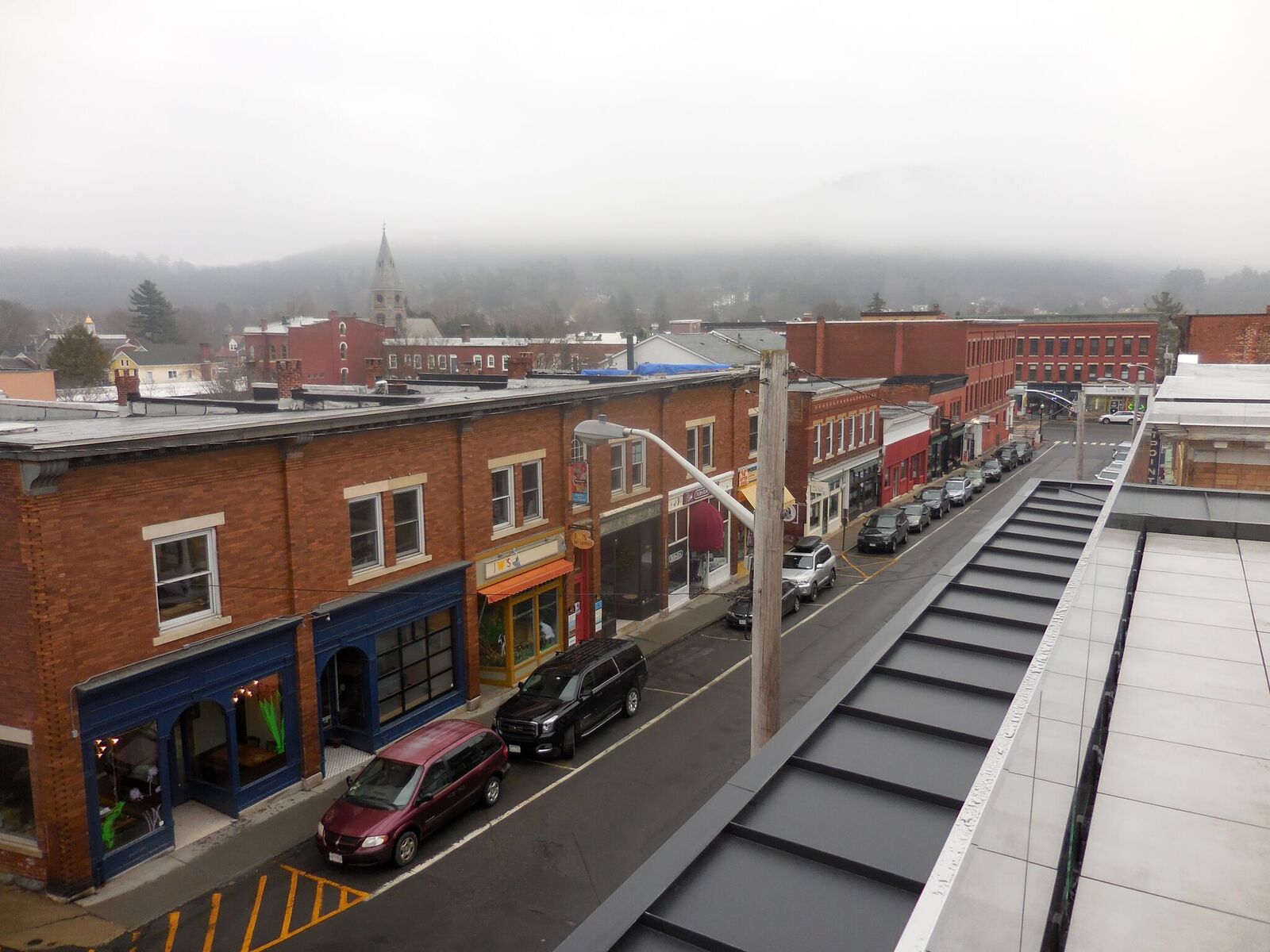 The view from the common balcony at 47 Railroad Street that will be open to tenants. Photo: Terry Cowgill

Great Barrington — One can practically picture the high fives in the upstairs office of Framework Properties and Alander Construction next month when the new 47 Railroad Street retail and apartment complex opens for business. Indeed, there might even be a champagne cork or two flying around.

“It’s been fun on a variety of levels,” said Framework partner Ian Rasch. “The town has been great to us. Great Barrington had a void that needed to be filled.”

Last time we checked in with Rasch and his partner Sam Nickerson, it was July and the crews were in the mid-construction phase. The sun was baking down on the communal balcony at the top of the storied street at 47 Railroad, where Rasch and Nickerson were building 13 market-rate apartments and four or five ground-floor office and retail spaces, including an eatery to replace the former Mario’s restaurant.

Indeed, the new restaurant is one of the biggest surprises. Many observers had expected just another trendy eatery would open in the spot that used to be occupied by Mario’s (formerly Fiori and, before that, Pearl’s, depending on how far back you go).

But it turns out that Nickerson is a frequent patron of the White Hart Inn just down the road in Salisbury, Connecticut, where popular and high-profile British chef Annie Wayte has served as partner and chef since the legendary inn reopened in 2015.

Nickerson reached out to Wayte and asked if she would consider opening another place at 47 Railroad. In an Edge interview, Wayte said she balked at first – she does, after all, have a full plate, so to speak. But Wayte couldn’t resist the challenge and the allure of Great Barrington.

“I love Great Barrington and spend a lot of time there. I have two young kids who go to Butternut,” she said, referring to the ski mountain to the east of town. “And I’ve had friends there for a long time.”

After being convinced to take the plunge, Wayte mulled several possibilities before settling on what will be called the Fox. Wayte characterizes it as a “hybrid” dining and retail experience.

There will be a coffee bar with casual and prepared foods available along with culinary-themed items such as cookbooks. Dinner will be served in the evenings. People who have heard about the Fox often ask Wayte if she is bringing back Mario’s. Wayte’s response is, if that’s what they were hoping for, then they will be disappointed.

“It’s quirky in that you will have retail, restaurant and a bar,” said Wayte, who is well-known on both sides of the Atlantic. “I’ve seen a lot of this done in Europe.”

The fare will be “very vibrant, fresh, contemporary and accessible” with a focus on rotisserie and what she called “a massive emphasis on side dishes.” And lots of vegetables, salads, herbs and “bold flavors” in a setting Wayte thinks will be ideal.

“The location is a prime position in Great Barrington. The view from those windows is fantastic,” Wayte said of the plate-glass windows that offer a view of bustling Railroad Street against the backdrop of East Mountain. “The most important thing is I want to create the right atmosphere.”

There will be some similarities to White Hart Provisions, a small-but-upscale cafe in the rear of the inn in Salisbury. Unlike the rest of 47 Railroad Street, which will be open for business in a matter of a few short weeks, the Fox, which Wayte expects will seat about 50, won’t open until the fall.

“We’re really excited to have her coming in,” Nickerson said as he gave a reporter a tour of the building. “She’s done a fantastic job at the White Hart. This will be good for Great Barrington because it’s something new and a little different.”

Elsewhere in the building, workers were busy finishing the common spaces and getting the apartments ready for occupancy, which Nickerson said he hopes will be ready as early as the first week of May. All of the units (10 are one-bedroom and three are two-bedroom) will have custom cabinets and other fine amenities.

In addition to the aforementioned cabinets, the flooring is white-washed Scandinavian-style. All 13 units come with designer light fixtures and appliances already installed. Names like Liebherr, Bertazzoni and LG can be seen. The units will be accessed with keyless electronic entry. To top it off, they’re all Energy Star rated and there are solar panels on the roof to power the common spaces.

“They’re basically done now,” Nickerson said. “But there’s a waiting list. New people are coming to us almost every day.”

It’s been about a year and a half since the selectmen granted Framework a special permit and off they went with the $5 million project that included demolishing the building behind Mario’s and putting up a three-story structure that now houses many of the apartments. Plans expanded slightly when the adjoining Martin’s Restaurant closed after a kitchen fire damaged it and Framework purchased that space for a little more than half a million dollars. In all, the current space is set to increase from about 11,000 square feet to 18,400 square feet. By Great Barrington standards, the project has proceeded at breakneck speed.

Rasch said, since the project is really four buildings all connected, there were “huge logistical challenges” that he and architectural designer Mike Valenti faced – not only in connecting water, sewer and electric but in making the property ADA-accessible and in preserving some of the architectural details in the existing structures.

“There were some challenges, but we got through it,” Rasch said, looking with Valenti across Railroad Street from an upstairs office shared by Framework and Alander. Rasch added that it was particularly gratifying to have his project near completion as some others in the area have stalled.

“The amount of projects that get announced and don’t ever get built or are delayed for years and years … we’ve tried to break that mold,” Rasch said. “Just do it, you know.”

For obvious reasons, Rasch did not want to elaborate on that topic, but there are at least three downtown development projects that were slow to get off the ground, were delayed or have become stalled seemingly indefinitely: an approved 88-room “boutique” hotel to be built by Vijay Mahida at the former Searles School; the reimagining of the so-called Flying Church on Main Street; and the Powerhouse Square project on Bridge Street. Serious work, however, has finally commenced on Powerhouse Square, with the former Laramee’s cleaners building getting demolished last month.

Another logistical challenge was getting high-speed internet service to the building. The only readily available option was from Charter-Spectrum, the cable television behemoth that owns the Great Barrington franchise. But Spectrum’s consumer-grade speeds max out at about 100 megabits per second.

So Nickerson and Rasch turned to Crocker Communications, which recently wired the tiny town of Mount Washington with fiber. Turns out that Crocker already had a node at the Mahaiwe, where officials there had previously contracted with the company to bring broadband to their building. So it was only a hop, skip and a jump to get real fiber into the 47 Railroad building.

“We’re giving people a choice,” Nickerson explained. “Cable will still be available for people who want it.”

As Rasch sees it, broadband is “an economic development issue for Great Barrington, and all of Berkshire County. To give you an idea, four of our residential tenants live in New York City and kind of bounce back and forth. And they were very keen on knowing that they would have very good internet connections.”

As for the rest of the commercial tenants, there are two others aside from Wayte’s the Fox: Griffin and Warrior Trading. A third had not yet signed on the dotted line as of late this week, so Nickerson did not want to name it.

Warrior Trading, which is a tech company founded in 2014 that educates people who want to learn the science of day trading and investing, will occupy the two storefronts that face the alleyway connecting Railroad Street with the old fire station, whose garage bays Framework is currently renting as a staging area for its construction activities.

“We teach people how to trade the markets,” Warrior owner Ross Cameron said in an Edge interview. “In order to be successful traders, they need to use the best tools. Instead of feeding you fish, we want to teach you how to fish.”

Cameron hails from Vermont but met his wife, Lauren, who is from New York City, in Great Barrington, which seemed like a great place to relocate their business. Warrior has about 30 employees – “team members,” Cameron calls them – five of whom will work in Great Barrington. Cameron expects the Great Barrington staff to grow since the space has room for 20.

Also coming to 47 Railroad is Griffin, an upscale vintage fashion, furniture and home goods store. Griffin will actually be relocating from elsewhere in town. The store is currently at the newish Delmolino building at the intersection of Main and Cottage streets where the old Betros market used to be.

In an interview, Connie Griffin said she and her husband, Paul Giroux, love the space and have nothing but nice things to say about landlord John Delmolino, but the lack of foot traffic at that end of Main Street has prodded them to move closer to the center of town.

“We do have loyal clients but, when they’re on their way to the center of town, they don’t want the challenge of parking twice,” Griffin said. “We’ve given this end of the block a chance. Railroad Street is ground zero.”

Griffin added that moving to Railroad Street was “sweetened by what Sam and Ian are doing. It’s interesting that they’re doing things in a way I haven’t seen before.”

Speaking of parking, the Edge asked Rasch the question that’s on everyone’s mind: Where will these new denizens of Railroad Street park? After all, Great Barrington’s parking problems are legendary, although, depending on whom you talk to, those problems could be ‘urban legend’ as well.

Rasch said his company will lease roughly two dozen spots from the owner of the dirt lot that stretches north along the railroad tracks and upper Railroad Street – between the municipal lot next to what was Mario’s to the building that formerly housed the Music Store.

“So we have secured that parking lot and have a long-term lease on that,” Rasch explained. “That’s enough for 23 parking spaces. Each residential tenant will have a dedicated space. And tenants with a two-bedroom will have two spaces. And they will have stickers.”

One of the things Rasch said he has enjoyed the most about the project was that the tradesmen enjoyed working on it so much:

“A lot of the development work that happens in Berkshire County is single-family residential, tucked away in Becket or Egremont, with people building big houses. All our guys, the tradesmen, they loved being on this job. They could walk to Gorham & Norton and buy a sandwich. The merchants loved that, too.

“I think they appreciate the fact that they can drive by here and show their kids, their wives and their girlfriends something that’s a very visible project as opposed to some fancy house in the woods.”