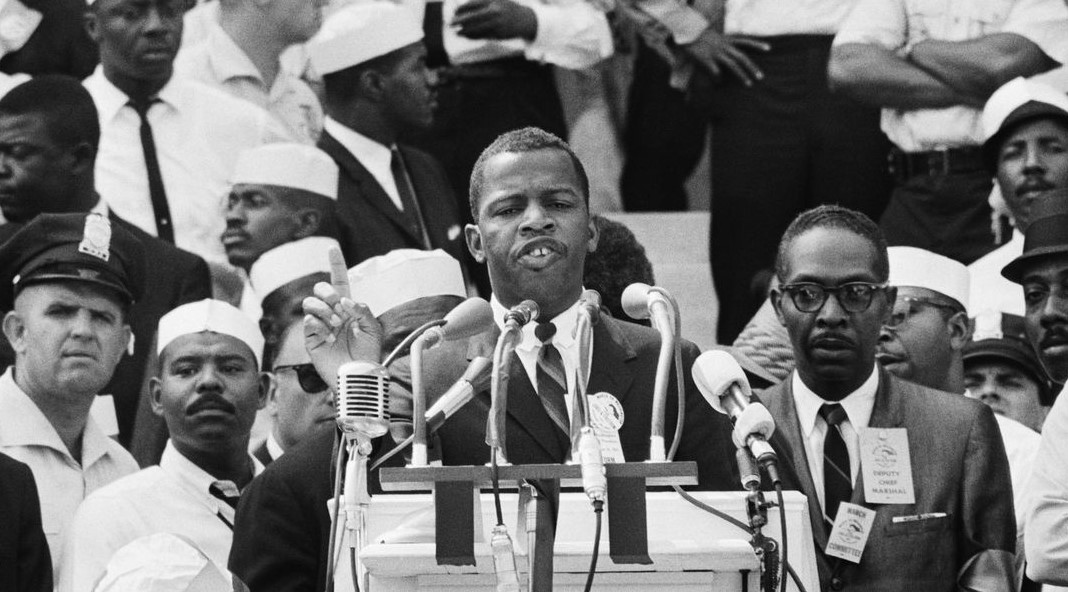 At my age it is strange to discover how easily moved I can be, how I can cry for five days — on and off — over the death of a man I never really knew. When I met John Lewis of the Student Nonviolent Coordinating Committee in Washington, D.C., in August 1963, I was 17 and had just graduated from high school. I went down to D.C. for the March on Washington with three friends from school and it was an event that was memorable. We had no hotel reservations and so we all slept bunched up together in the Chevy we had driven in from New York City. We had no spare clothes so remained as we were for four days. We ate oddly; Howard Johnson’s was the closest thing to a fast food restaurant at that time.

I wasn’t a militant person, but my need to understand the racial divide prompted me to go. I was sympathetic to the cause but not ardent. However, while there, I learned more about myself and my perceived “people” than I had anticipated. There was a party we heard about given by the Student Nonviolent Coordinating Committee to be held on the Mall, so, hoping for some real food along with enlightenment, we all went. This was the night before the big rally with its speeches and entertainment (Marian Anderson, Joan Baez, Bob Dylan and others). The crowd at the gathering was large; apparently a lot of people had heard about it. If there was any food, I never found it. I did meet a very dynamic young black man, though, and we talked for a short while. Although I didn’t know it at the time, the man was the very dynamic John Lewis, as I would learn the next day. We talked about the reasons behind the march and he was most articulate. He told me he should really be somewhere else rewriting his speech for the next day because the Committee objected to his more militant rhetoric.

I asked him about the text and he recited a bit of it for me; it was indeed high-pitched and incited listeners to take a darkly firm hold on the issues. It wasn’t exactly encouraging violence, but it wasn’t discouraging it either. We talked about it. I’m sure I had no influence on his final words, but for a time I felt that perhaps I had. He talked about his people’s nearly 350 years of slavery in America and, in my innocence, I remarked that it hadn’t been that long, that his people had been freed a hundred years earlier. He laid it on the line for me, “white boy,” that I was mistaken. For his family and others, freedom had not brought about equality, it had only made some things harder, and that in the Alabama he had grown up, in his family was like an island without a port.

Then he asked me about my family background. I told him we were Jewish, that we lived surrounded by other Jewish families, ghetto-like, and that I had been often accused of personally killing Christ (whom I had never heard of when I was still a child) when we lived in Massapequa Park on Long Island. I had been beaten up a number of times for this heinous crime. John Lewis quieted down and then made the remark that has haunted me all these years.

“You’ve got like 4,000 years of slavery and discrimination on you,” he said. “According to the Bible, every era of your family’s existence, you got captured, tortured, enslaved, and every race of people has tried to wipe you off the face of the world. Look at the war I was born in: 1940,” he said. “In a civilized country, your people were enslaved, locked up and exterminated.”

“Six million people were killed,” I said to him. ‘My parents’ families were almost entirely wiped out.” He was 23 years old I think and he was holding me by the shoulders. We stood about 2 feet apart. He was looking intently at my face, his eyes holding my eyes.

“But you’re okay here,” he said. “You can live your life like it should be led. You’re white.”

“White isn’t everything,” I responded. “I’m here now because it’s important for us all to be seen as the same.” I was an idealistic teenager then and, in many ways, remain so now. Persecution remains what it was then and I have added a series of other rationales for intolerance to my list. I am gay; I am old: just two among them.

In the eighth grade at John P. McKenna Junior High School in a civics class, I was pointed out as typical of my “race,” the Jewish race. Then I was picked out again as a perfect example of the Negro race, the black race, because of my nose, lips and hair. Thank goodness there was no homosexual race, or I probably would have been singled out once again.

Lately I have been struck by the coincidence of that short conversation with John Lewis. That the president should deny John Lewis the respect he has earned over the past 33 years and has deserved even longer is a true crime. That I have not seen this man again in our long lives is a shame. His speech in Washington was dynamic and truthful and inspiring, right up there with Martin Luther King Jr.’s speech. I never really knew much about Lewis until this past week. Yet, time after time, I have been driven to tears as fact after fact about him has been exposed. I never forgot our conversation. It meant so much to be found worthy of sympathy because of the history of my people and be found to be a “brother” in his world of discrimination and slavery extended. Today American Jews are often seen as outsiders in the broad world of American civil rights. For African Americans, we are considered to be among the oppressors; some may be, but so many more are not.

That his death has moved me, so many times this week, to tears is relevant to the reality here. The history of the Jewish people, my people, around the world has paralleled the history of the black race in this country; that is so clear to me now. We have so much experience of intolerance that even we forget that history repeats itself. I have my full civil rights in this country because I am seen as white — hated somewhat for being Jewish, but still white — and his family and his people are still struggling throughout the continent to be seen as just people, people like me, people accepted and seen just as people. I’m the lucky one. And I will miss John Lewis, a great man I never knew, another person with a purpose, as much as anyone can.