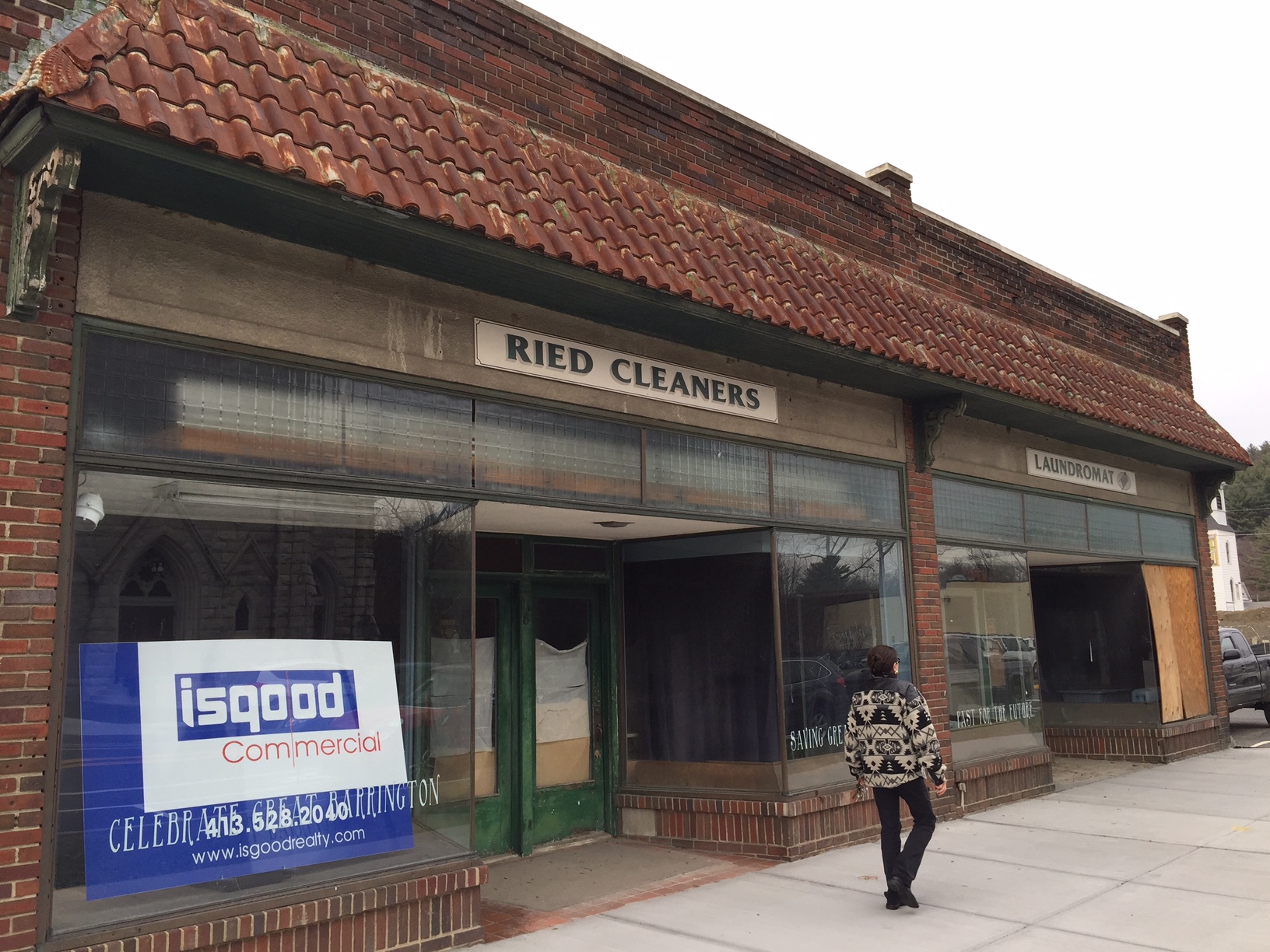 Great Barrington — The rejection of an experienced developer’s offer to buy a highly contaminated property on Main Street, one that for years has leached carcinogens into groundwater that has migrated to surrounding properties and is possibly moving across Main Street towards the Housatonic and into drinking water sources, leaves questions about what should be done to protect the town and the public from exposure. It also leads to questions about why a offer this fall to purchase a property that has sat on the market for 9 years, and finally remediate the contamination, was dismissed by the estate that owns the property. Attorney Edward McCormick represents the estate, according to the real estate agency that handles such offers.

The owners of Ried Cleaners at 218 Main St. retired in 2006 after 54 years of family business, and put the building up for sale. Isgood Realty Managing Broker Eric Steuernagle said the property was first listed for $795,000 before anyone knew about the contamination, primarily tetrachloroethylene (PCE), which leaked through the building’s floor drains. PCE was used in dry cleaning solutions because it is nonflammable and highly stable.

Steuernagle said a buyer’s inspection revealed the problem, and ever since, even at $169,000, the property has been “impossible to sell” due to environmental issues and many unknowns that may require further study about the depth and distance the toxins have traveled.

Town Planner Christopher Rembold says “a worst case scenario” is if the contaminants have “reached bedrock,” and said he could not speculate on whether this had happened. A 2015 Phase II environmental study paid for by a $91,000 state grant says the monitoring wells do not extend to deeper strata bedrock, and so right now it is unknown just how far the pollutants have migrated. Contaminated groundwater may move more rapidly if it has reached bedrock, according to the report.

Developer Jeffrey Cohen of Mill Renaissance, LLC, told the Edge he made an offer of $100,000 with an idea of tearing down the building and rebuilding a complex for retail, offices, and possibly an apartment or two. Cohen is developing the Eagle Mill complex in Lee, which itself has asbestos and lead contamination that will require remediation in the cost range of $1.2 million.

“We’re familiar with how to deal with these issues,” Cohen said, adding that the seller’s counter offer was: “Full price, as is.”

“In my 45 years of experience I have never been involved in a situation where an owner with a problem property was unwilling to negotiate the price in the context of a credible offer from an experienced developer,” Cohen said.

He said all offers are sent for review to attorney Ed McCormick of McCormick Murtagh & Marcus, who administers the Ried estate, Ried Realty Corp. (RRC). Cathy Coffman is listed as the contact for RRC, but the only listed phone number in her name does not work. Coffman and her two brothers, Michael and Tony Ried, are the children of Herbert Ried, who died in 2007, McCormick said.

But McCormick, who said he grew up in the Ried’s neighborhood, denied ever knowing of Cohen’s offer. “If there were such an offer I would encourage consideration of that,” he said. “I have no knowledge of any clean offer. I’m not saying it did or did not come.”

Cohen’s offer was confirmed by two sources who insisted on anonymity.

According to an article by The Berkshire Record last week, a Berkshire County Probate Court judge last summer ordered McCormick and his firm to reimburse a family for excessive fees charged over a protracted period in the administration of an estate. The family accused him of mismanagement that reduced the value of the estate.

Rembold said he gets an average of one phone call per month from people expressing interest in purchasing the property, in “fits and spurts.” He added that remediation “to get the site as clean as possible” runs to around $1.6 million, though the site could be treated in different ways for less, depending on how it will be used.

Cohen said in a situation where the liability of the remediation “far exceeds the value of the property,” property owners will generally jump at an opportunity to offload it.

“Who would have thought one contaminated property could threaten other properties,” Cohen said.

Indeed, attorney McCormick said the Ried family is facing a “black hole.” Early on, RRC paid $400,000 for a study to see how far the contaminants traveled from the property. Later, MassDEP issued a notice of non-compliance to RRC in 2009 for failure to meet a deadline for assessment work.

The family got an estimate of $1 million just to transport the toxic soil to an appropriate disposal site found only in the Midwest. “The corporation ran out of money,” McCormick said.

Not only did RRC run out –– it may owe. McCormick said RRC has an “understanding” with the town that upon sale it will reimburse the back taxes, and another agreement with the state to pay back the $91,000 Brownfields grant. If that isn’t enough, there are MassDEP liens on the property. McCormick said he didn’t recall how much.

The family, he said, “is not going realize anything from [the sale].” He added that if Coffman “could relieve the family of any liability, that is important to her. It is important to the community that the property gets redeveloped.”

A similar situation unfolded recently in Pittsfield, when an inspection turned up dry cleaning chemicals blocks away from the former Stetson Cleaners at 35-41 Federal St. in back of City Hall. The Stetson owner also closed up shop in 2006 and owed $100,000 in back taxes.

At Ried, the cleaning was done in a building out back that was later torn down.

The study by Lowell, Massachusetts environmental consultant TRC documents human exposure through vapor and possibly through drinking water. For instance, “there is a chronic risk,” says the report, “to current postal workers exposed to basement air at the [Great Barrington] Post Office due to naphthalene, PCE and TCE.” TRC classified the situation as not being “an imminent hazard…based on the work patterns of the USPS workers…”

But MassDEP (Department of Environmental Protection) said “elevated concentrations of chlorinated VOCs have been detected in indoor air at the Post Office and may be associated with contaminated groundwater drawn into the building by their basement’s sump pump.” MassDEP further said while air quality problems at 9 Rosseter Street and 11 Rosseter Street did not exceed standards, the samples were taken in summer, and noted that winter samples may give “worst case conditions.”

Salisbury Bank, which sits next to Ried’s, was also tested, and contained levels that “may not have been low enough to conclude a lack of impacts.”

Air quality standards are higher for residences than commercial buildings.

The TRC report said the site is roughly 1.25 miles from a municipal water supply from a groundwater aquifer and infiltration gallery off Hurlburt Road near the Green River. “Several drinking water wells are known to exist east of the Housatonic River…an emergency water supply from the East Mountain Reservoir for the Town…a private drinking water well is located on Pine Street, more than 600 feet to the east of the site…” The report concludes that human exposure “could occur” if the contaminated groundwater from the site moves to the eastern side of the Housatonic.

TRC further wrote: “The contaminant plume appears to be migrating to the east, toward the Housatonic River. PCE concentrations in two wells located on the eastern side of Main Street are slightly above MassDEP drinking water standards.”

The good news, however, is that the soil at the site is covered by sand and “not likely to be disturbed.” Exposure might come through construction or utility maintenance work, the report says.

Rembold said what was learned from the testing done so far is that the site could be reused for less than $100,000 and minimal remediation like paving to seal the soil from rain. If the building were to be reused, “vapor mitigation” would be necessary and that will run closer to $150,000. To remove the bulk of the soil and significantly reduce contamination will cost around $700,000, Rembold said, adding that more grant money may be available for site developers through the same Berkshire Brownfields Program, administered by Berkshire Regional Planning Commission.

Cohen says the site is a danger. “The bottom line is you have to keep the town safe,” he said, “and the longer you wait, the more at risk other properties and people are.” He said the town should “take it, fix it, and then go looking for the money.”

He said both the developer and the owner need to be released from liability in order to develop the property and thus control the spread of contamination.

“At the end of the day, the town has a responsibility to protect the people,” he said.