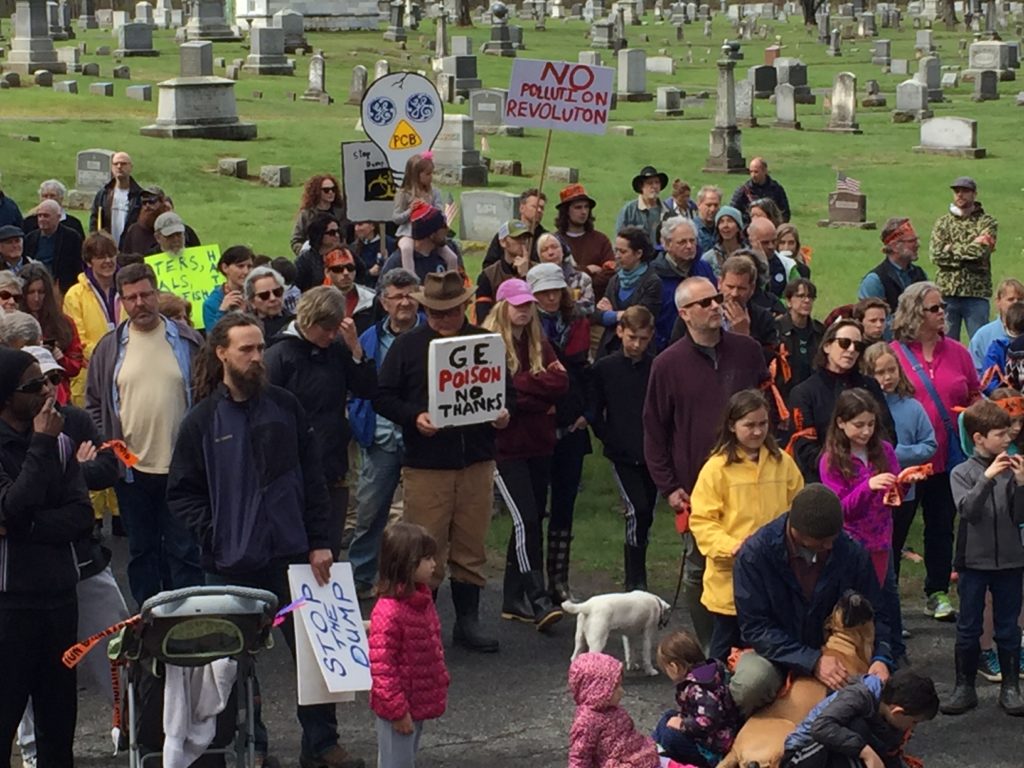 Heather Bellow
The Stop the Dump trek began at St. Bridget's cemetery on Van Deusenville Road in Housatonic, and proceeded through the woods along Rising Pond to the site of the Rising Paper Company's dam where high concentrations of PCB-laces sediment was lodged.

Housatonic — The old adage that fiction imitates life is right now staring down the Berkshires, like the great eye of the dark lord Sauron casting out to the Shire with its golden children and sprawling tree roots, sparkling waters and greens garish and spreading from a week of rains. 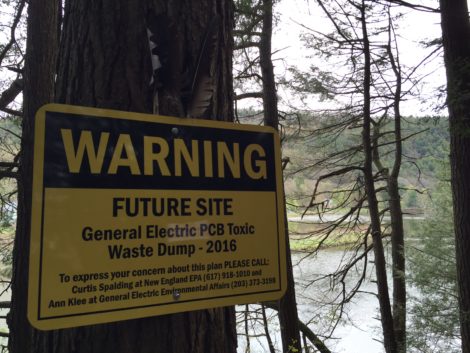 A warning sign on the banks of Rising Pond. Photo: Heather Bellow

No, this is not The Lord of the Rings, though lately it feels as if we are Hobbits under threat. This is the General Electric Company (GE) and its accountants casting their many eyes across these hills, dragons hoarding gold to the tune of $200 million the company does not want to spend to ship “likely” carcinogenic PCB (polychlorinated biphenyl) waste out of this Shire after it is forced to clean the Housatonic River of the chemicals it discharged there over decades from its Pittsfield plant.

GE is now in court, fighting with the Environmental Protection Agency (EPA) over the PCB dump issue, among other contested items in the EPA’s recommended remediation of the Housatonic. As part of the EPA’s $613 million plan for the company to clean up the “Rest of River” from Lenox Dale to the Connecticut border, the EPA wants the PCB sludge shipped by rail to a certified dump in another state, likely Texas. GE, however, has already gotten its mitts on at least one of three potential dump sites: one in Lenox Dale, one in Lee, and here at Rising Dam in Housatonic where the old Rising Paper Mill building is a reminder of the way factories such as GE’s discharged PCB-laced oil into this river. 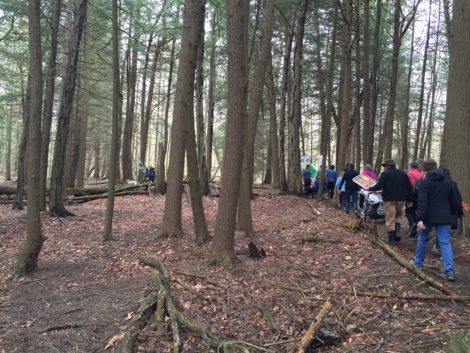 Anti-dump protesters on the path through the parcel designated as a toxic landfill. Photo: Heather Bellow

But the proposed dump site, which GE owns and has already marked it as such, also sits smack between homes on either side of the river. And on this land is a well-worn walking trail between the river and a forest, one that residents have used for at least half a century.

Housatonic, a village within Great Barrington, isn’t about to be rolled by GE the way Pittsfield was when the company somehow convinced the city leadership and the EPA to allow it to dump the PCB waste dredged from the river next to the Allendale Elementary School, in a landfill known as Hill 78, a chilling backdrop to the school’s playground, where air quality monitors are yet another ominous presence.

No, this cannot happen anywhere else, say residents, and around 250 protesters came to GE’s Housatonic dumpsite last Saturday to mark this slice of earth with resistance. Diego Gutierrez, Gabrielle Senza and Christina Koldys organized it as part of the newly formed Stop the Dumps initiative, a group now linked up with longtime cleanup warriors, Housatonic River Initiative (HRI). Protesters gathered at the veteran’s memorial at St. Bridget Cemetery, along Route 183, many sporting orange “hazardous materials” tape, and some wearing yellow haz-mat suits. 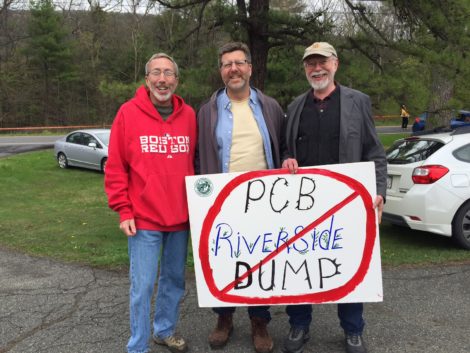 A “PCB-free H20” stand was overseen by children. At another table one could write letters to GE opposing dumps in the Berkshires and everywhere, and place them in plastic bottles to mail for $2.50 each. The idea, said Senza, was to “plug up lots of mail rooms.”

While there were many families, there were old-timers, too, three brothers whose father worked at the GE plant for 33 years. Louis DelMasto was born and raised in Housatonic, and has lived near this river his whole life but for a stint in the service. He worked at GE for 8 months. “The interesting thing is I don’t have a thyroid,” he said. “They took it out years ago.” He said no one else in his family had thyroid troubles, but that he used to fish the river “often,” though he never ate the fish.

DelMasto explained that when their father began working for GE, he worked on electric transformers, and later for naval ordinance. GE used PCBs in a concoction that insulated the transformers, exposing the workers to the chemicals before, the company says, the carcinogenic risks were known. 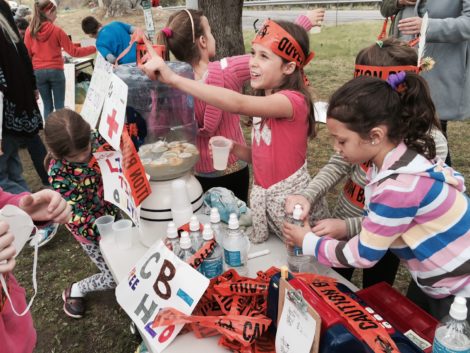 “We never really talked about it [with our father],” DelMasto said. “It was a non-issue back then. But when he died, he was very sick…he was full of holes…it was awful. It was cancer…”

Richard T. DelMasto is a retired Congressional aide for former U.S. Rep. John Olver who attended his first meeting on PCBs in Pittsfield in 1996. “I was [Olver’s] PCB guy,” he said. “I’m not surprised that GE’s not a good corporate citizen. They’re really doing an awful thing here, and they’re not gonna place a dump here — there’s no way…I don’t see the court allowing them to do that.”

Richard DelMasto said human pressure will absolutely help stop plans to put dumps in the Berkshires. “The more the better,” he said.

“My dad also worked for GE and died of bladder cancer caused by exposure to asbestos, which GE denied,” said James Salvo, another lifelong resident. “There were piles just blowing all over Pittsfield.” 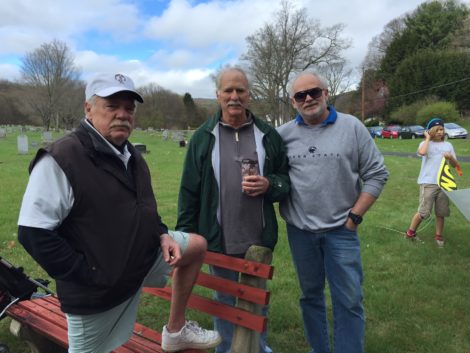 The DelMasto’s whose family has suffered from exposure to PCBs in Pittsfield: from left, Louis DelMasto, Richard DelMasto, Peter DelMasto. Photo: Heather Bellow

Retired environmental engineer Larry Lampman’s grandchildren live near the proposed site. While he said he is not sure the EPA’s plan to have GE clean the river sediment as it already has in Pittsfield is such a hot idea, “they shouldn’t be putting a dump in the neighborhood,” especially, he added, since it is beyond “dispute” that PCBs “vaporize.”

PCBs migrate in this and other ways, affecting critters all over the world. Research indicates the chemicals can leach out of landfills and into soil as far as several miles beyond them. These four gentlemen said it was commonly accepted “around here” that PCBs are in the air.

Then there were the young, too young, perhaps, to be saddled with this darkness. As people crossed the railroad tracks and trespassed on GE-owned property, they did what children do in a forest and along a river: play. The slightly older ones were eloquent in their simplicity. 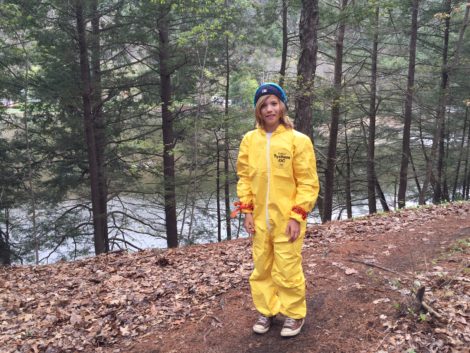 Landon Curletti, 11, who lives down the street from the site, dressed in a Haz-Mat suit. Photo: Heather Bellow

Landon Curletti, 11, wore a haz-mat suit in foreboding contrast to the woods and river. He explained the reason for his attire. A dump here, he said, “will pollute the animals, and people already have PCBs in them because of what went into the river. I’m very disappointed that they’re wrecking this nature site, a beautiful site.”

Horace Anderson, 10, recently moved from New York City with his family to a house within eyeshot of the Rising Dam and the proposed dump site. “The nature here is beautiful and I really don’t think that GE should be polluting this amazing place,” he said. “There are kids living here, and animals. It’s just wrong.”

His father, Reed, came to last week’s Great Barrington Selectboard meeting to express his concern, not just for himself and his property value, but for the overall threat a PCB dump would pose in every which way. When the group had reached Rising Dam, and children played on the rocks near the rushing water, Anderson pointed across the river. “There’s our house.” 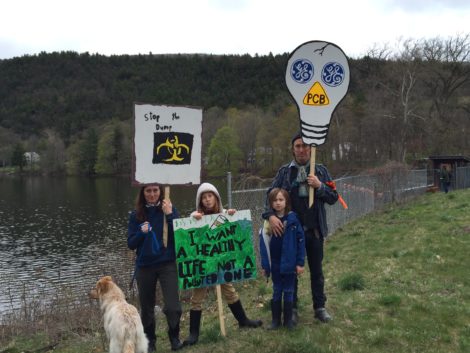 The Anderson family, who just moved to Housatonic and now find their new home across the pond from a potential toxic waste dump.  From left: Gretchen, Horace, Holiday, Reed. Just to Reed’s right and background is their house. Photo: Heather Bellow

State senate candidate Adam Hinds came along for the one-and-a half-mile loop, too. He said these protests are important. “As the dispute resolution process moves forward between GE and the EPA, there has to be a way that cleans the river and keeps the communities safe,” he said. “The more that this type of action is taking place the more that people will be paying attention.”

“There’s no way of knowing whether this [protest] is going to work — it’s just necessary,” said filmmaker and writer Mickey Friedman, whose documentary Good Things to Life documents how deeply the company polluted Pittsfield neighborhoods and the related struggles with a corporate goliath.

“GE is extraordinarily powerful, and they happen to have a very real precedent on their side,” Friedman added. 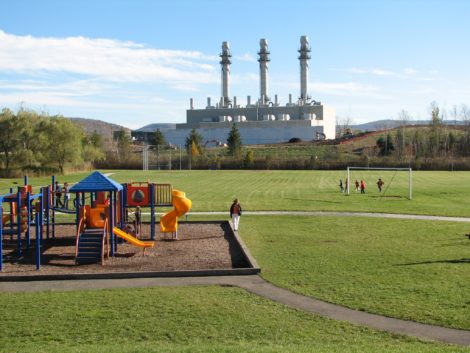 The toxic Hill 78 rises above the playground at the Allendale School in Pittsfield. Photo: David Scribner

That precedent is Hill 78 next to Allendale Elementary School.

“The EPA has said landfills are safe,” Friedman went on, “the EPA said to GE, it’s OK to dump PCB-contaminated soil and sediment in Pittsfield, so it’s really about keeping up pressure on EPA, the state and GE to treat PCB-contaminated waste. That’s the only solution: treatment. There’s really no scientific justification for landfilling PCBs at this point.”

Friedman said a twisted legal and public relations game is at work.

“One of the problems about these landfills,” he said, “is it makes GE’s position seem that much more reasonable, which is leaving an extraordinary amount of contamination in the river. People are so afraid about the prospect of having a dump, but what they don’t realize is that PCBs are extraordinarily dangerous and they move in the river, they don’t stay in any place, they get volatilized into the atmosphere, we’re breathing them in, the wildlife is breathing them in, and so it’s not a safe option, leaving them.”

“This is just the beginning,” organizer Diego Gutierrez shouted into a bullhorn, when all protesters had returned to the cemetery.

And local activist, musician and poet Pooja Ru Prema was on hand with her ukulele and voice to remind everyone why they had come.

“Don’t give up the things you love, my dear…”