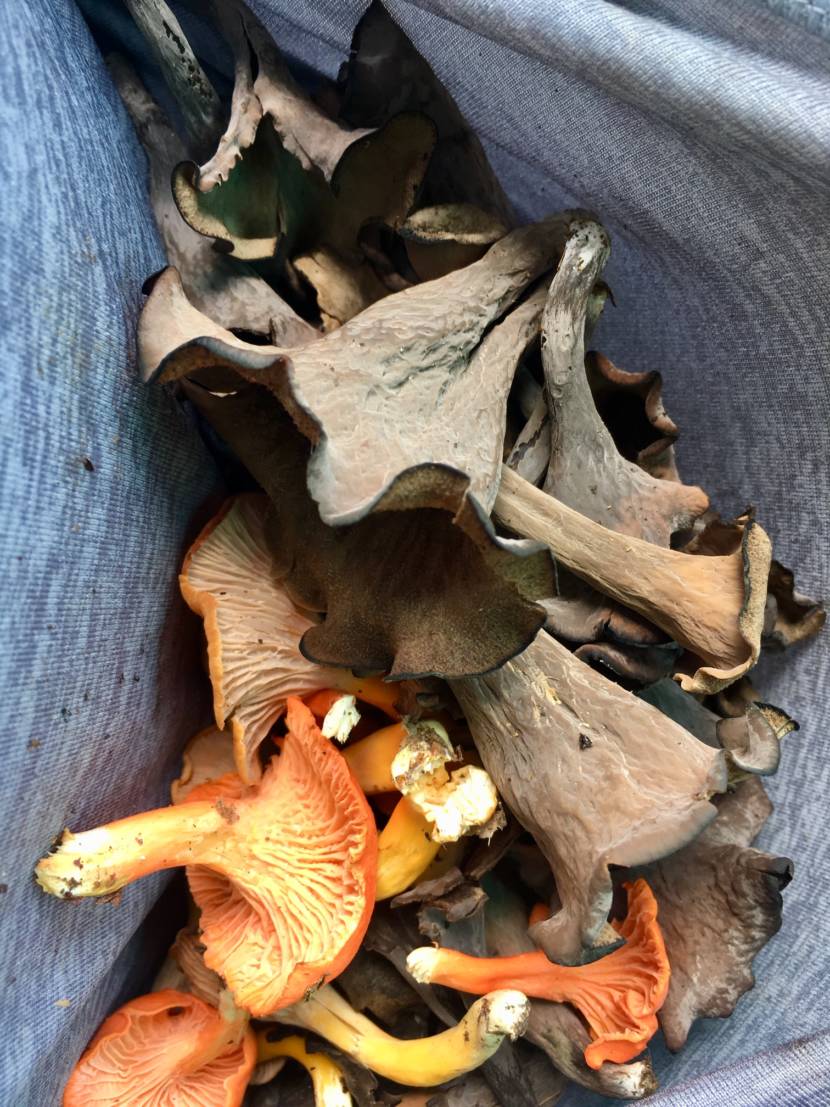 It’s not often that we try sum up what happened right beneath us but, for me, that’s what keeps popping up for 2018, figuratively and literally: the stuff just underfoot—mushrooms.

Mushrooms are fungi and, as a good friend once told me, fungi like warm, dank and often dark places. (There’s a close human parallel here that we need not investigate further.) This year’s insanely hot and humid weather was, needless to say, absolutely perfect for the growth of fungi. Put another way, it was total mushroom madness this year.

I started noticing them in May—little sprinkles of color popping up here and there on my hikes in South County with my little honey badger, Gingersnap. I’m a novice mushroom hunter, but I knew enough to recognize that the ones that looked like Smurf villas were something to treasure. With their upside-down ice cream-cone shape, the morels were hard to miss. Some were a rich brown, others more of a dirty khaki; all had a beautifully coffered cap and. if you cut them down the middle, a completely hollow core. Word got out pretty quickly among chefs and amateur mycologists, who soon posted giant woodland finds as well as gorgeous sautés atop pasta, steaks, you name it.

After all, what’s better than a morel sautéed in butter with a bit of onion and garlic, and a pinch of salt and pepper?

I began noticing these little orange beauties in summer when our forest floors and meadows were awash in a colorful carpet of mushrooms—a banner year by any measure. In decades of hiking these woods, I’d never seen such a sea of fungi, much of it edible and ready for the taking.

Then came the black trumpets—a poor man’s black truffle, with beautiful dark funnels sprouting up overnight, and perfect for drying for later use. Simply brush off any dirt, lay ‘em on a baking tray in the sun for a few hours, and you’ve got year-round mushrooms for pasta, gravies, even for flavoring vodka.

Then came the insane number of hen of the woods and chicken of the woods, which grow on trees and are so named for their tail-like appearance, posted on Instagram like Trophies of the Woods. Then the oyster mushrooms. And then the porcini—oh, the porcini! King of the woods, Zeus of fungi, delicious sautéed with fresh cream or dried for a year-round joyous delicacy.

Then the lion’s mane, a blob of white with a dripping appearance, which tastes oddly like crab meat (go figure) and is absolutely delicious—a mushroom I had never tried before but which quickly became my favorite of all. And in South County’s lowlands, there were the hedgehogs, with their odd soft, spiny cap bottoms and savory butter yum.

To be clear, I proceeded carefully into the world of foraged fungi. This is not a hobby for the uninitiated. It’s true what they say: Mushrooms can kill. And the good mushrooms? Mmm, mmm, savory goodness, often with massive health benefits. Mushrooms are medicine, too—good, strong medicine that’s been around for millennia.

A few tips for newbies:

— Get yourself a good book. Go simple; I did. Concentrate on identifying a handful (at most) of the easy ones. I recommend “Mushrooming Without Fear: The Beginner’s Guide to Collecting Safe and Delicious mushrooms” by Alexander Schwab.

— Join a local Facebook group devoted to mushrooming. South County has at least one, and there are several more in the state as well as our region. Hint: Don’t pester your community of choice with endless queries of “Can I eat this???” Take a deeper dive with your own research and a good gander at what others are posting.

— Join our local mycology club. It’s free! There are hikes just about every Sunday spring through fall. But be forewarned: The website sucks, and these are not formal learning sessions. You’re essentially invited to join our local expert, John Wheeler, on his weekly mushroom safaris. If you learn something, it will be incidental. That said, John’s awesome, and you’re bound to meet interesting people; I did. Europeans tend to flock to these hikes, as well. And, if you’re lucky, you’ll come home with scrumptious mushrooms to cook that John has identified for you as good to eat. As John is fond of saying: About 10 percent of the mushrooms in our area are edible to delicious (“choice”); 10 percent are some sort of poisonous (most will give you gastrointestinal distress, a few will kill you); and 80 percent are somewhere in between.

— I’ve come to concentrate on a few mushrooms that I feel are almost foolproof: morels, chanterelles and black trumpets, among a few others. That said, nearly every edible mushroom has an evil twin that resembles it but which is poisonous, chanterelles included. So, don’t be a ninny; educate yourself. Again: Concentrate on two or three mushrooms to start and get good at identifying them.

— Don’t pick gilled mushrooms unless you are an expert! Mushroom caps (underside) generally come in three types: ridged, spongy and gilled. DO NOT PICK GILLED MUSHROOMS. They tend to be the poisonous ones. Buy them at Guido’s or a favorite restaurant and leave the rest to experts. And yes, there are other types of mushrooms, such as polyspores, and simply odd ones like lion’s mane and hedgehog.

— Porcini come from the family of boletes. They’re tasty but tricky, so be careful. Some are amazing, others look similar but are too bitter to eat. Some are poisonous. Hint: Nearly all mushrooms are associated with a favorite tree or trees with which they co-habitate: Porcini like spruce; reishi, hemlock; chaga, birch; and hedgehogs like swampy stuff, etc.

— Every mushroom has its season. That’s why I found the mushrooms in the order that I did, silly.

— The most beautiful of mushrooms tend to be the most poisonous. That slender, tall, white thing of beauty, the image of innocence and purity? That’s a destroying angel. It will kill you. That adorable perfectly shaped mushroom with the white stem and a reddish hued top, sometimes with picture-perfect white polka dots? It will kill you. Two rules of thumb that I go by: I avoid all gilled mushrooms and all white mushrooms. (White puffballs can be an exception, but they’re boring to eat, anyway.)

— Weird, woody-like mushrooms can also be good pickings, such as reishi and chaga. Consider yourself lucky if you find those. The health benefits are world-renowned, and they’re valuable to boot — perfect for tea.

— Some mushroom hunters will not invite you to tag along, nor will they suggest areas to try unless they’re confident you won’t find anything of value there. Some folks are just like that. I know a few of them. After all, would a gold prospector tell you where he found his best nuggets?

— When you pick mushrooms, do it with a knife (Swiss Army is fine) and cut it above the dirt so that you have less to brush off. Bring along a basket so they can lay flat. Only pick mushrooms that look prime versus over-ripe. Be choosy! And consider leaving some for the next person, especially if that person is a friend and you know it’s their favorite spot to look.

— When you cook them, keep it simple: olive oil, butter, garlic, onion, salt, pepper, maybe cream or a splash of white wine. It’s best to use no more than three or four of the above suggestions at one time. Eat them on toast, tossed in pasta, atop a steak or mâche lettuce or watercress, or simply scramble with eggs.

— Mushrooms are FASCINATING. AND BIZARRE. There are countless varieties that come in all colors (even blue and purple!), sci-fi shapes and perplexing consistencies (some are essentially slime). Some taste like seafood, others like pumpkin or steak or apricots. On the downside, some smell like rotting flesh, poop, urine and dirty socks. Many have bizarre names like Dog-Dick Stinkhorn and Dead Man’s Penis. Some are cute: Jelly Babies and Elvin Saddles.

— And, much like icebergs, one only sees the very tip of what the mushroom actually is. The vast majority is just beneath the surface, a web of mycelium that can extend across a whole forest floor and is responsible for feeding many of the trees that surround it. Think of mushrooms as a sort of fruit that stems from the mycelium below—fruit that can sprout, grow and mature in a single night.

— The amount one can learn about mushrooms is quite literally endless. There are thousands of different kinds. John Wheeler has more than 90 books about them and three decades of driven experience. And he’s still learning something new every day. Hint: take a mushroom, put it on white paper and cover it with a drinking glass or small bowl. The next morning you will see something magical on the paper below: a spore print! They come in all sorts of colors and patterns and are used to help identify a mushroom. Cool, no?

One thing is for certain: Once you begin to notice what’s growing beneath your feet, it’s near impossible to un-notice it. Once-quick hikes turned into irrepressible scans of the forest floor (and up tree trunks, too) for me. This past season was such that I’d often return with a shirt full of morels or chanterelles or black trumpets or even porcini—and I wasn’t even looking. I often stumbled upon them, right underfoot, even when pressed for time.

In Germany, when my daughter, Schnuffie, and I realized that there were edible chestnuts on the forest floor, we’d make forays into the woods, bringing back basketfuls to roast with friends. Out there in the woods, we were alone, except for the Italian and Polish immigrants. They knew. Their baskets were full of chestnuts, porcini, morels and chanterelles.

But you don’t have to travel to Europe to appreciate what’s underfoot. Nature’s bounty is right here waiting to be picked, ready to accent your home cooking with a worldly flair and your year with memories worth writing about.