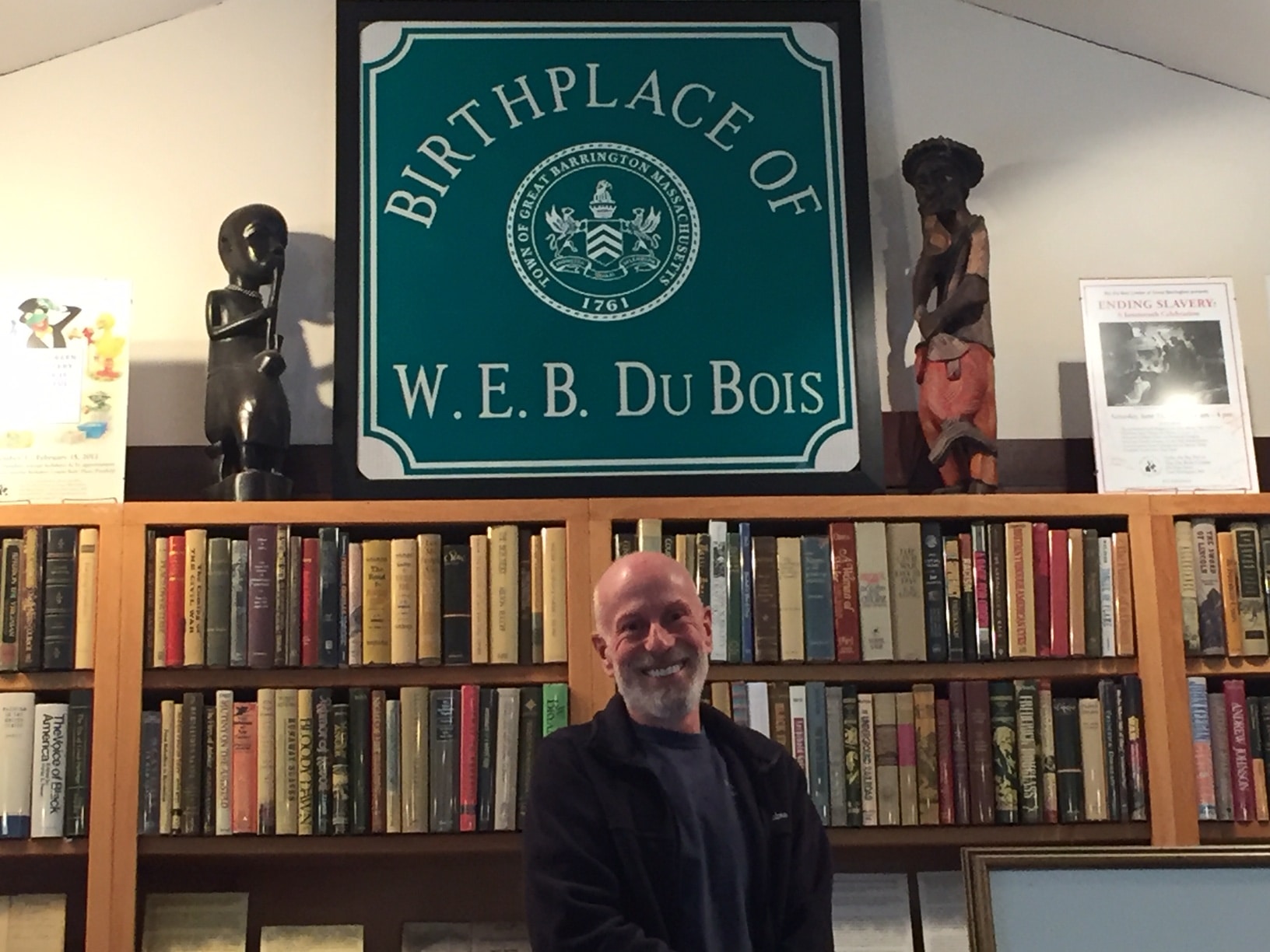 Great Barrington — Just two steps inside the Du Bois Center at Great Barrington, an essential lesson awaits: instructions, from W.E.B. Du Bois himself, on how to pronounce his surname. “U as in You, Oi as in Boy, accent on last syllable,” reads the note, scrawled in black ink, at the bottom of a typewritten letter dated Sept. 21, 1933. The correspondence, between Du Bois and Frank H. Vizetelly of Funk & Wagnalls Company, states: “As you may have noticed, ‘The Literary Digest’ is publishing each week the correct pronunciation of prominent names that are liable to be mispronounced. Before such publication, my aim is to have the authority of the bearer of that name. To that end, will you indicate as exactly as possible your own pronunciation of your name; also, the syllable that is stressed?” The letter, framed above a photo of Du Bois, is but one in a myriad of historical artifacts culled by historian and founder of the Du Bois Center, Randy Weinstein — whose surname, in case you were wondering, is pronounced like Einstein, as in Albert Einstein.

“How can you understand someone if you can’t pronounce their name?” is one of Weinstein’s essential questions. This, along with his passion for history and artifacts, led to his opening the Museum of Civil Rights Pioneers in 1997; his partner business, North Star Rare Books, allowed Weinstein to “keep all these great [historical] pieces here by selling books.” The deal, despite a new moniker that came in 2006 when Weinstein achieved nonprofit status, remains the same: He sells rare books to fuel his passion for collecting remnants of a bygone era. Central to his interest is William Edward Burghardt Du Bois, who was born Feb. 23, 1868, in Great Barrington. Suffice it to say, the roots of this interest are deep, stretching back decades to Norwalk, Connecticut, where Weinstein was raised in the 1950s.

“I always sensed something was off,” Weinstein said of the fact that Rebecca Alexander — or Old Beck, as he affectionately called her — lived in separate quarters away from the rest of the family, “even though she lived with us five days a week.” Weinstein recalled this of the Black woman who helped to raise him in the suburban neighborhood where “white privilege was the only way of life” he saw unfolding outside his living room windows. Weinstein recalled taking his dinner upstairs to eat with Old Beck, where the pair watched television together and talked. She had her own family — 20 minutes away on Jefferson Avenue — “a very cloistered area” where the city’s Black families lived. In 1988, when Weinstein’s own daughter was born, he named her Rebecca after Old Beck; for the next seven years, until Old Beck’s death in 1995, once or twice a month they “made the trek” down to Norwalk where Weinstein and his children (he also has a son, Tyler) were treated like family regardless of their differing skin tones. “I just eliminated from my mind the color of race,” Weinstein says of his long-ago decision to be open to all, especially “the downtrodden, minorities, people who never had a chance in this world.”

When Weinstein came to live in Great Barrington at the age of 18, he remembered Du Bois’ name being “surrounded by controversy, [and] disparaging [comments],” at the time, something for which Weinstein had zero tolerance. “People are afraid of him because they don’t understand him,” is how Weinstein sees it, noting that “you have to become educated to appreciate what [Du Bois] did; and by ignorance [many] just shut him out.” He grew “sick and tired” of reading what he read about Du Bois: namely, lingering controversy over Du Bois’ late-in-life decision, at the age of 93, to apply “for admission to membership in the Communist Party of the United States” in which Du Bois was “long and slow in coming to this conclusion” (letter, dated Oct. 1, 1961, from Du Bois to Gus Hall, Chairman, Communist party of the U.S.A.). He soon turned his attention toward opening people’s eyes to history through his own passion. “If you want to effect change, the easiest way is to go for the kids,” Weinstein told me of his work at the former Kolburne School. “[The students] sort of jumped into my world because they saw that I was enthusiastic,” he recalled of getting the at-risk students involved in history, adding, “they are willing to listen if you get to them soon enough.” Weinstein and his students learned together while playing tennis outdoors or H.O.R.S.E. in the gym; for every letter earned, Weinstein would tell another story — of Frederick Douglass, or Du Bois. When confronted with inner city kids who wanted to run away to “get back home,” he hit them with big questions: “You want to escape? Can you imagine what it must have been like to be on the Underground Railroad?? “[The kids] got caught up in the whole story, they got engrossed,” said Weinstein, who was not a classroom teacher — but before long, kids were getting academic credit for spending time with him. “That was the genesis of the teachable area here,” he said.

For the past 23 years, the Du Bois Center has shed light on its namesake’s accomplishments: as a scholar (he was the first Black man to earn a Ph.D. from Harvard University in 1895); a civil rights activist (he co-founded the NAACP in 1909); and writer, (his seminal work, “The Souls of Black Folk,” is at the heart of  this year’s Du Bois Legacy Festival); and myriad other accomplishments. Weinstein’s goal in opening the public space was to finally reach the day where he “would be able to open the paper and see Du Bois’ name without any kind of baggage or controversy along with it.” And, in small part, it was his way of paying homage to Old Beck. He made a deal with her that if he ever amounted to anything, or wrote a book, he would dedicate it to her. The year after she died, Weinstein did just that. In “Against The Tide: Commentaries on a Collection of African Americana, 1711-1987,” the author acknowledges, “my daughter’s namesake, Rebecca B. Alexander (1900-1995), the granddaughter of Camden, South Carolina, ex-slaves, who not only raised me from the cradle, but entrusted me with her story.”

Weinstein’s goal, on the eve of Du Bois’ birth and throughout the year, remains solid: He and his organization are dedicated to exploring the African American experience and issues regarding social justice through programs, events and exhibitions of artifacts. It’s a topic that, for him, has come full circle. His daughter, Rebecca, is now a special education professional in the heart of Los Angeles; the pair speak almost daily about life, her students’ IEPs, and being a minority in a largely Black and Latinx school. “My passions have become hers,” the proud father reported: “She keeps me so fresh, and most importantly, I learn so much from her.”

And at the end of the day, that’s the real victory: continued discussion and conversation about things we don’t understand. Weinstein, who serves on the W.E.B. Du Bois Legacy Committee, has curated an exhibit on display at the Mason Library through Saturday, Feb. 29: “W.E.B. Du Bois: An Enduring Educational Legacy.” “What we’ve worked so hard for is here, [and] there is no longer an us and a them, establishment and Du Boisians,” said Weinstein of the selectboard, which, he feels, has embraced the community’s collective efforts to celebrate Great Barrington’s native son. “We have arrived,” said Weinstein in closing, “in exposing people to a truth, so eventually the truth won’t sting them anymore.”