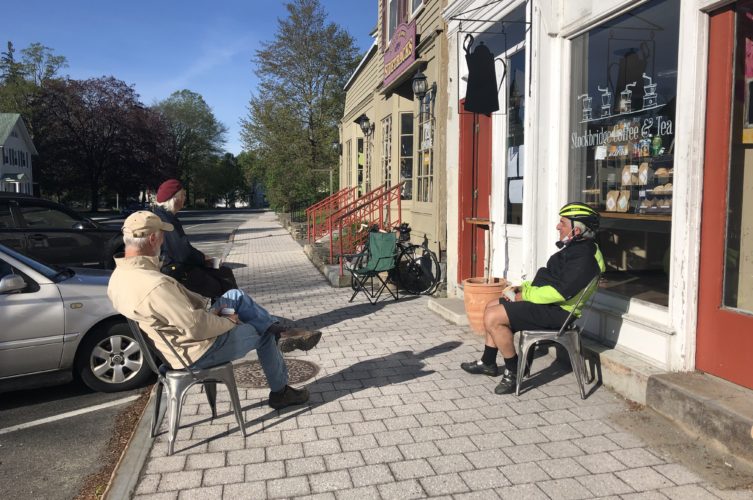 I live in the town of Stockbridge, which isn’t exactly a metropolis, and I’m used to isolation. In fact, as a writer and audiobook narrator, it’s essential to the non-performing part of my work, which is one of the reasons I live here: There are fewer distractions and thus I can concentrate.

Sometimes — scrap that — often, the only people I see all day are my coffee shop buddies. Bob, Bob, Bob, John Loiodice, Paul, Kathleen, Linda and Alan “there’s no such thing as bad weather, just bad clothing” Wilken. We’re all early risers and we gather at roughly the same time every morning at Stockbridge Coffee and Tea on Elm Street. I may not know all their last names, but I do know all about their dogs, lives and knee issues and what they think about the latest news headlines: We share our opinions on these matters over coffee every morning.

Then the world crashed around us and our coffee shop closed along with millions of other businesses around the world, including my own.

When my teenagers were out of the house, I used to relish my rare moments of solitude. But since the pandemic showed up, I’ve learned that it’s not really “solitude” if you can take a break from it to meet a friend for lunch at Once Upon A Table, do yoga at Kripalu or swim with the Pace Makers at Simon’s Rock.

We can talk to other people via Zoom and Facebook of course, but there’s a reason why grown-ups say Too Much Screen Time isn’t good for kids: It isn’t good for adults, either. And when I make the mistake of watching the news after hours online these days, I often feel an overwhelming sense of despair, which is saying a lot for me because I’m generally a cheerful sort of fellow. It’s in my DNA.

Early one snowy morning in mid-April, I was missing my morning routine so much I made myself a cup of coffee — a ghastly concoction but just about drinkable — threw a garden chair in the back of my car and decided to head down to the coffee shop anyway like a homing pigeon.

I was sitting in my chair in a warm coat and hat on the sidewalk outside the coffee shop feeling a tad bereft when I saw first one then another masked figure come around the corner: one with now long white hair and a beret — that had to be Bob — and the other on a bicycle — yes, that was John Loiodice.

“Hey Alison, good to see you! We’ve been coming here every morning,” John shouted from behind his mask 6 feet away.

“Great! So what have you been up to?” I shouted back.

“I’ve decided to run for office. There was a gap in Water and Sewer, and I want to make a difference, so I thought I’ll run.”

Do I know anything about water and sewer? Absolutely not. But having drunk coffee with John just about every morning for the past few years, I know that he is a good, balanced, sane, kind, man who listens and can be trusted to do the right thing. And if we want good, sane people running things, we need to vote them into office, which is something I can do. I felt hope rising.

“The only issue is it’s an open ballot so people have to write my name in,” John shouted.

“No one can pronounce your name, let alone spell it,” I shouted back.

I am deeply tired of the divisive, vitriolic, unkind rhetoric that seems to abound these days and has become as toxic as the coronavirus. And while I feel confident that today’s teenagers will change the world for the better, they’re not quite old enough to take over quite yet.

While we wait for the next generation to become strong enough to lead, I think we need to be very careful who we vote into any kind of office, which is why I’d strongly recommend that the residents of Stockbridge write the name JOHN LOIODICE at the end of their ballot and thank him profusely for running when they next see him.

As I write this, I am delighted to report that Stockbridge Coffee and Tea is now open for takeout. The weather is warmer and Bob, Bob, Kathleen and Paul have started to show up again. The comedy moment happens when one of us forgets we’ve got our mask on and takes a swig of coffee, or another gets out of the car saying “I can’t find my mask” before realizing it’s hanging off his left ear.

So if you’re a Stockbridge resident, all you have to do to vote for John Loiodice is write his name on the ballot next to the words “Water and Sewer.” You can either vote early (see link below for how you can vote right now) or maybe write his name on your hand or something until June 9. Whoops: You have to wash your hands all day long these days. Sorry. Hmm. Maybe text his name to all your friends or something?

The election date is Tuesday, June 9. To request an absentee or early voting ballot, you can visit the town website.

John Loiodice is running for the seat on the water sewer committee in Stockbridge. He has been a resident of Stockbridge with his wife, Sheri, and their son, Michael, since 1984. He has practiced medicine and surgery both at Berkshire Medical Center and at Fairview Hospital. He continues to be an associate professor in surgery with the University of Massachusetts School of Medicine in Worcester and is on the consulting staff at Austen Riggs. Until very recently he managed his medical office on a full-time basis. However, with the hiring of an associate, he is finally able to devote some of his time to give back to the Stockbridge community that has nourished his family for 36 years.